Looking for a creative way to display your Harry Potter Funko Pops? I created another fun display case for last year’s Yule Ball-themed Advent Calendar of Funko Pops! Check out the tutorial below to learn how to create this! :) 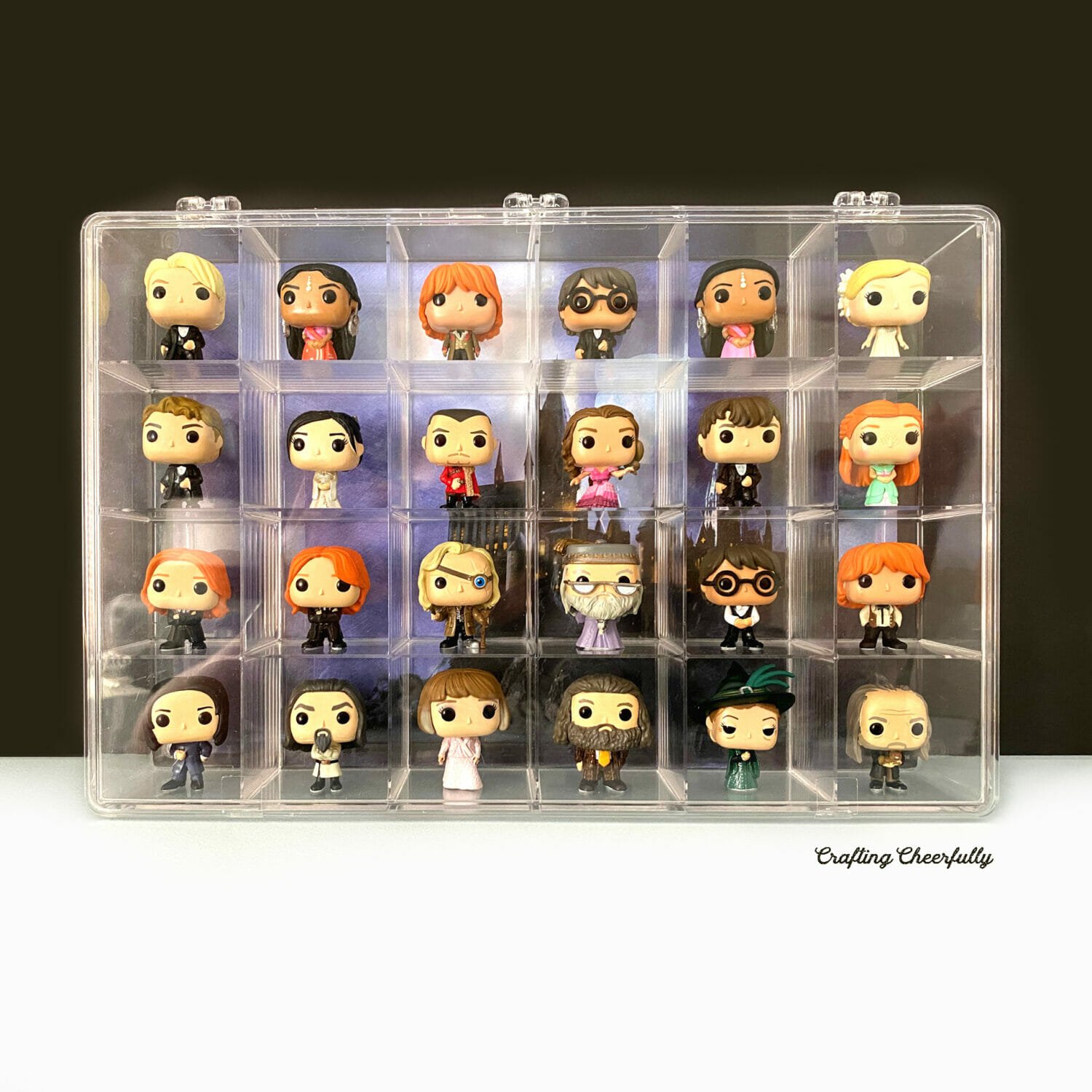 It’s Harry Potter’s 40th Birthday today! To celebrate, I’m sharing the DIY Harry Potter Funko Display case I created to hold this past year’s Advent Calendar Funko Pops. This is the second case I have created, the last one I made using a silverware drawer organizer. This time I decided to make something a little easier but just as inexpensive. I hope this tutorial is useful for anyone trying to figure out a fun way to display their Funko Pop collection!

This past year’s Advent calendar featured Funko Pops at the Yule Ball. I decided to use this fun sheet of paper called “Hogwarts at Night” for the backdrop. The display case itself came from The Container Store. When I purchased it, I paid $16, which was way cheaper than a lot of the acrylic display cases I was finding online. Those cases had really nice magnetic doors but were much more expensive. This case was not intended to be stood up like I’m doing, but it works. To open it I need to lift it up and then lift the lid up from the bottom. 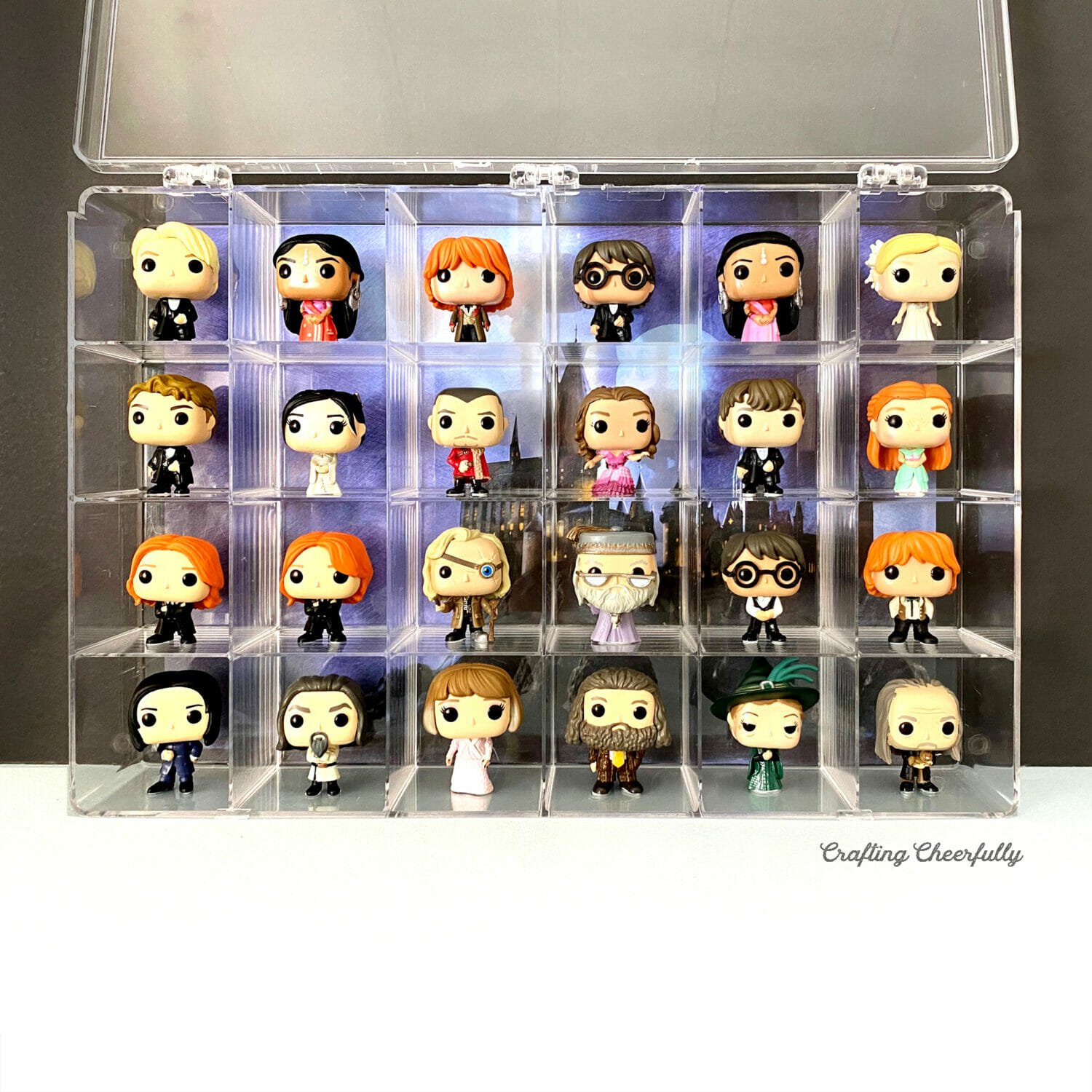 Below is the tutorial for this case! Be sure to also check out my DIY display case from last year. I noticed the next Advent Calendar is already available for pre-order on Amazon. It’s such a fun thing to do in December :) 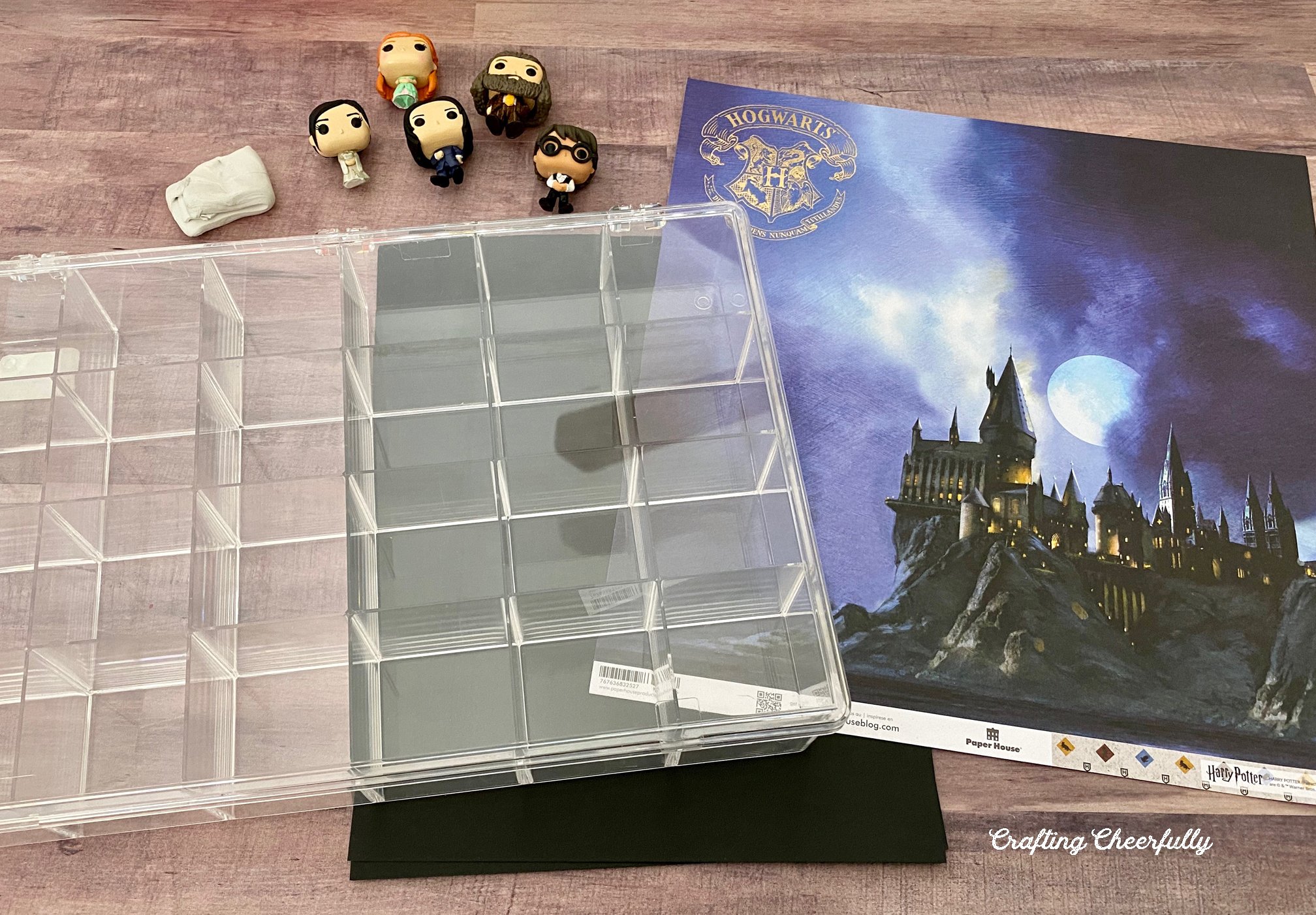 Step One: Create the themed backdrop for the case.

Trim the piece of scrapbook paper to the height of the display case. I laid my piece of paper on the back of the case and marked where I should cut. 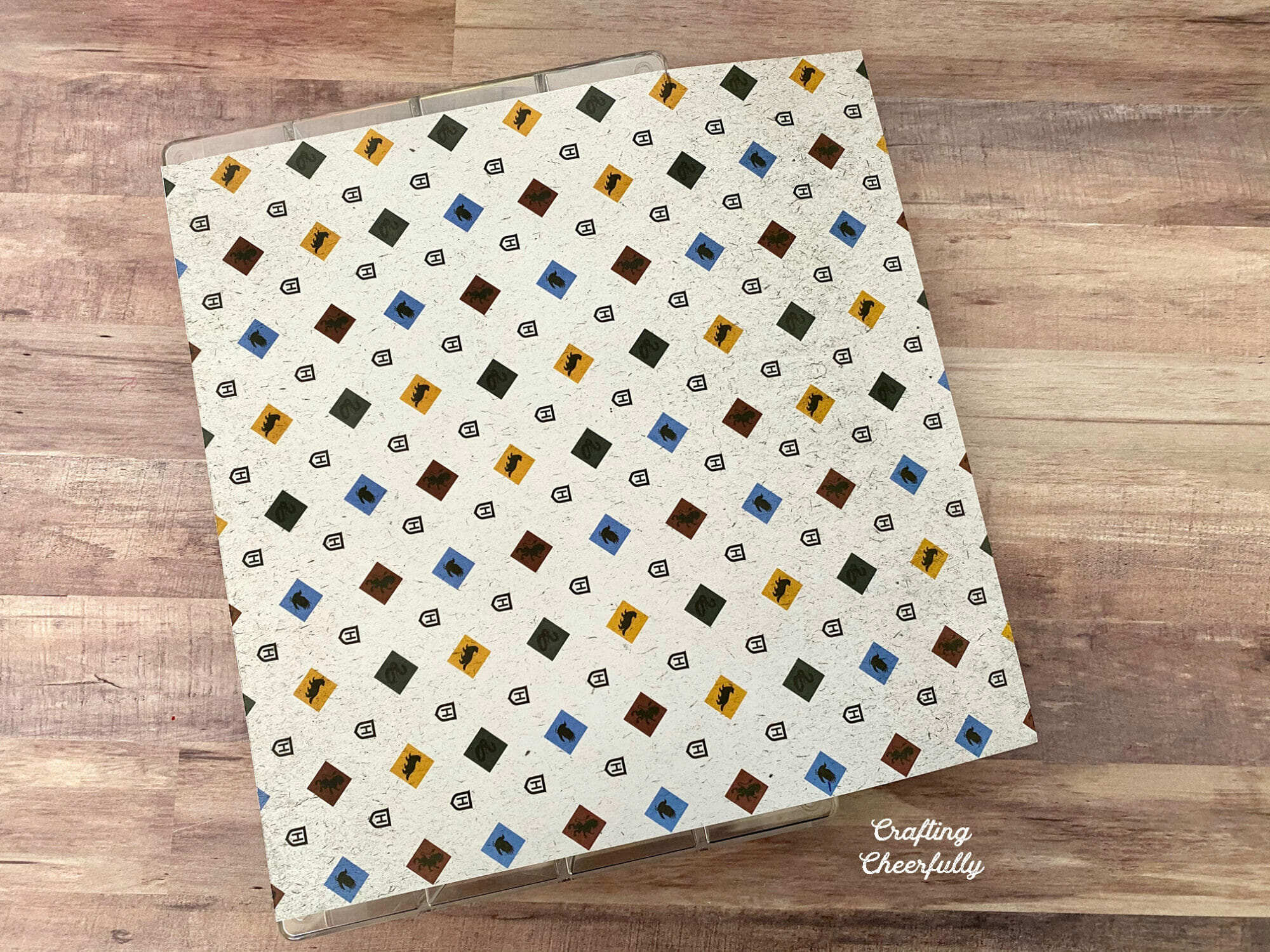 Since my case was just slightly wider than the piece of scrapbook paper, I needed to add a little bit of black paper to each side. I chose black paper because it was the least noticeable. Line one edge of the paper up with the side of the case and determine how much wider your case is.

My case was 3/4″ wider than my piece of paper so I needed to add 3/8″ of black paper to either side. 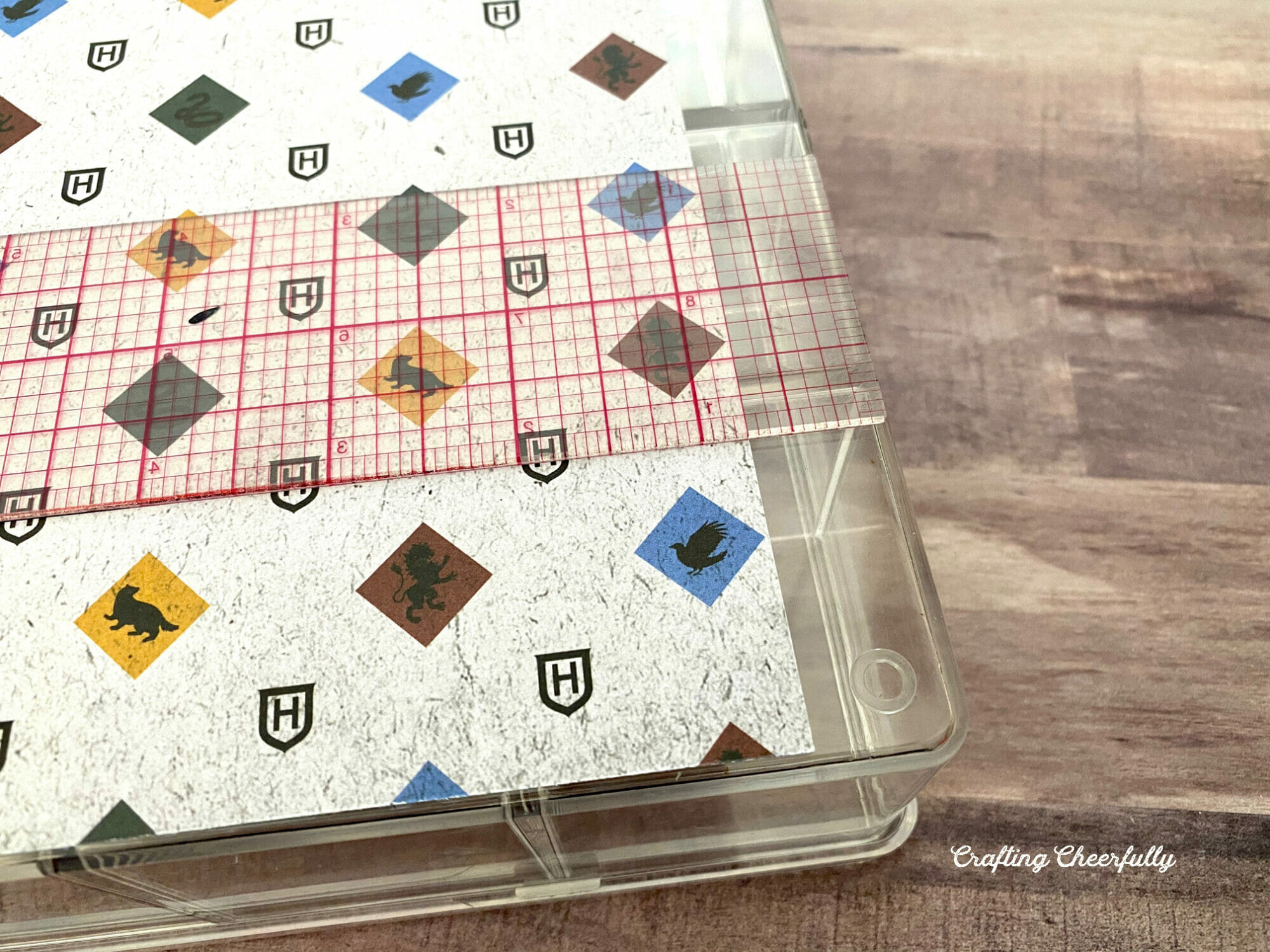 Use double sided tape like Scor-Tape to attach strips of black paper to either side of the decorative paper so it is the same width as the case. 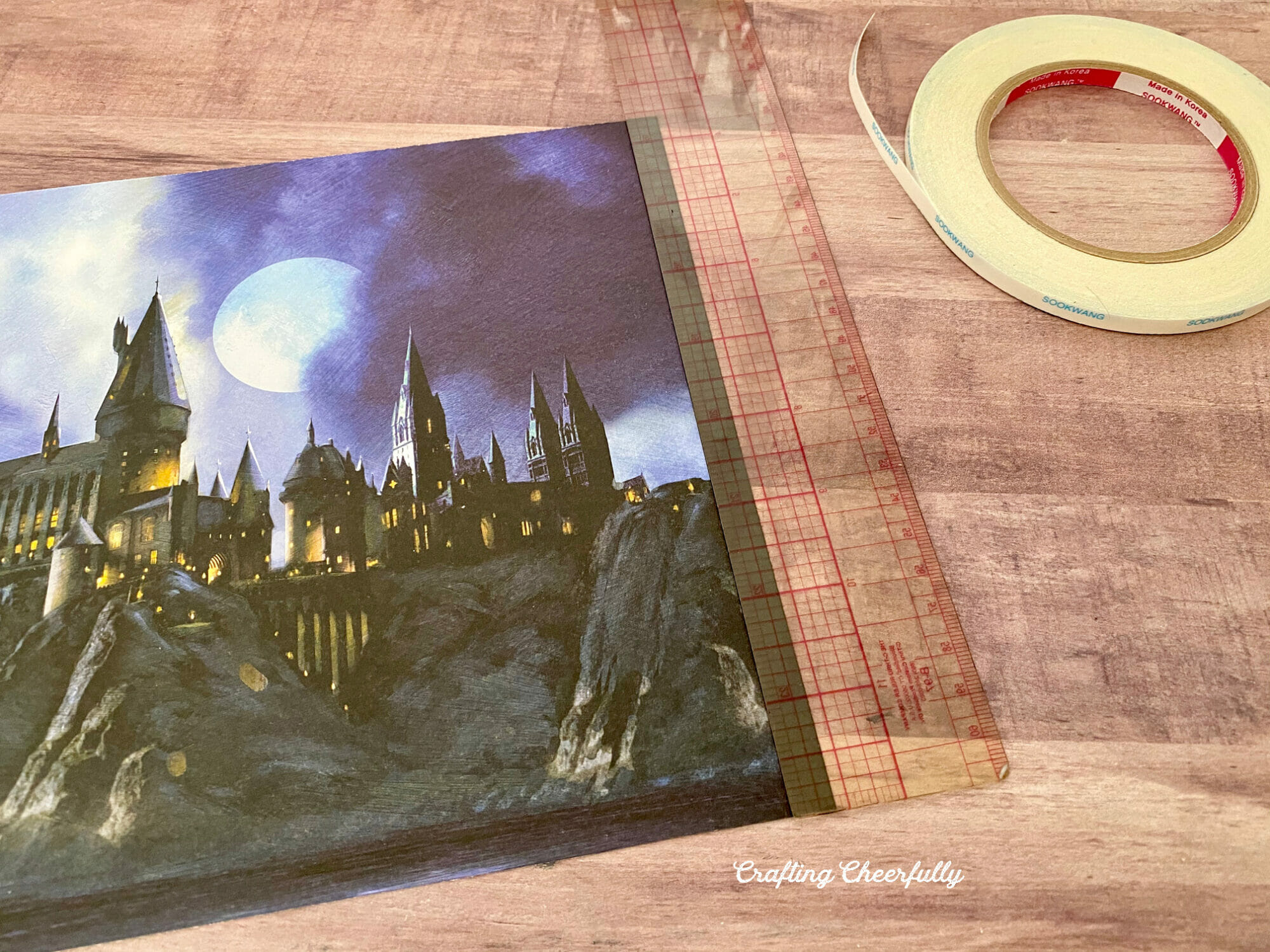 Below you can see the finished backdrop. Isn’t this sheet of paper great? I wasn’t able to find a piece of Yule Ball-themed paper but thought this worked since the ball took place at Hogwarts at night!

Step Two: Adhere the backdrop to the back of the acrylic case.

Use adhesive on the back of the case to attach the decorative backdrop. I used 1/8″ Scor-Tape which was the width of the shelves. By placing the tape along the shelving grid, I was able to hide the adhesive. I also placed small squares of tape on the four corners where the little pads/feet were. 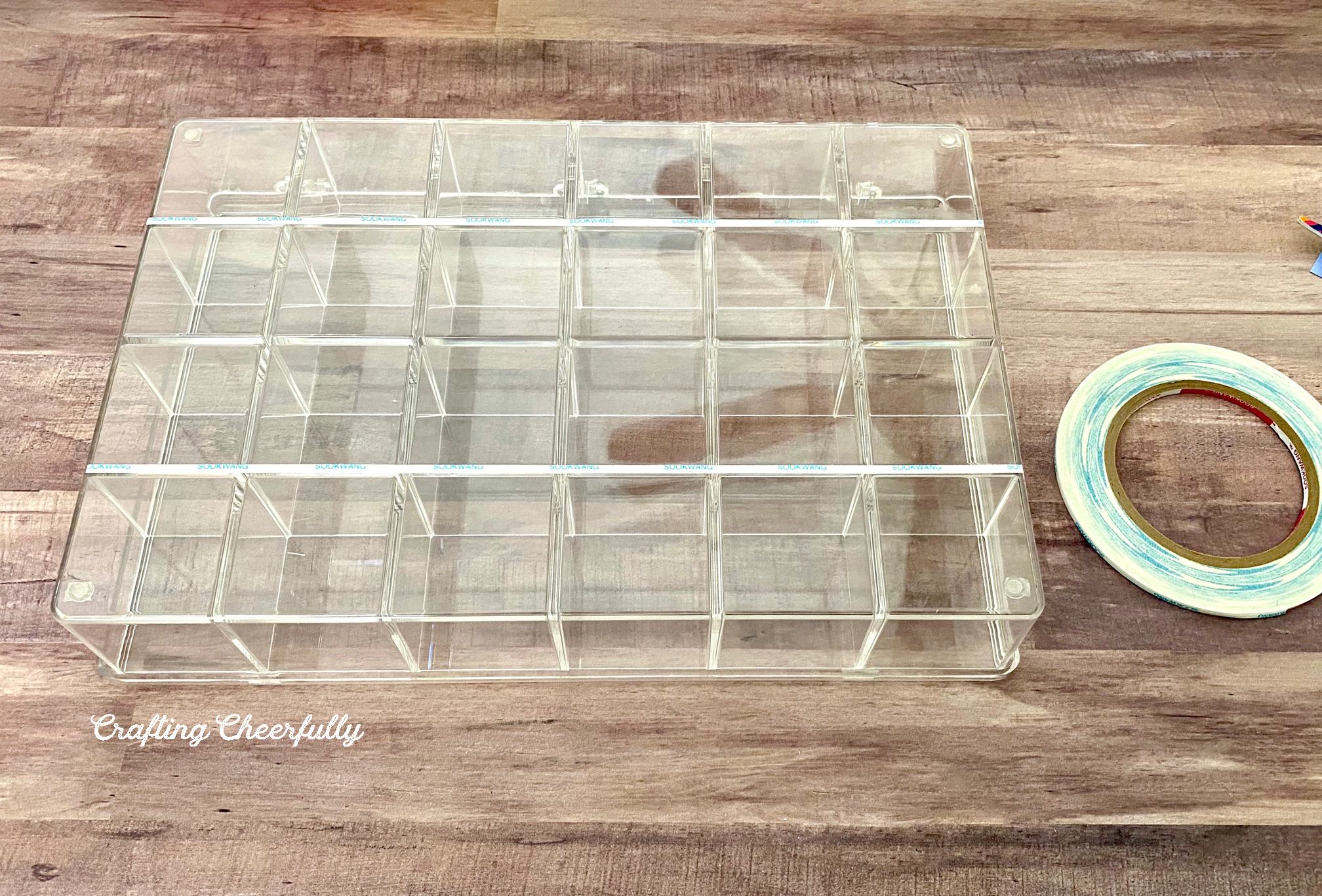 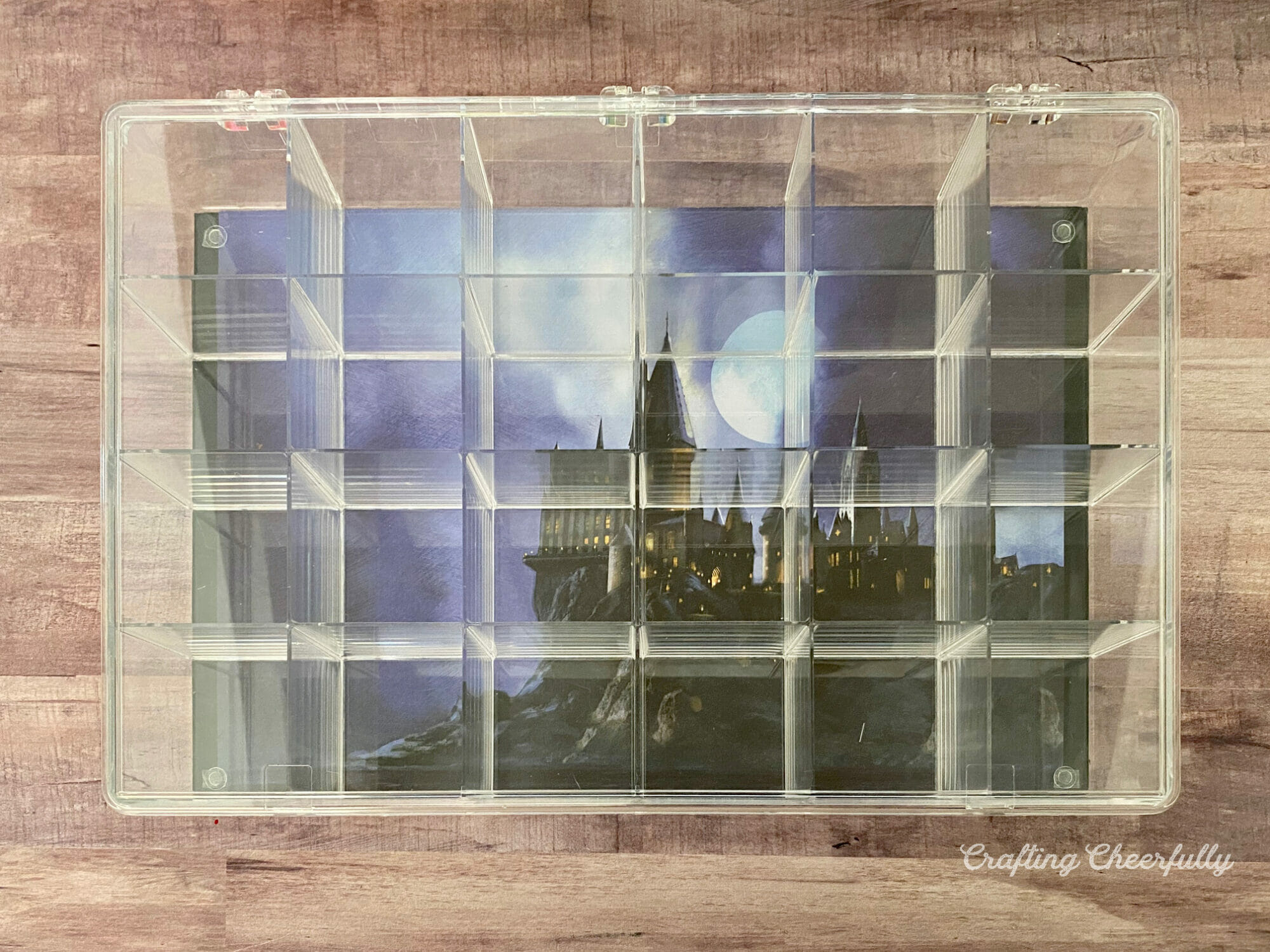 Step Three: Use Poster Putty to place all of the Funko Pops in the display case.

For my last case I used Vecro Dots to hold my Funko Pops in place. This time I decided to use Poster Putty which worked really well – actually better than the Velcro Dots so far! I used a little bit on the bottom of each Funko and that was enough to stick them in place. The Poster Putty is removable and doesn’t affect the Funko Pops. It does leave a little residue on the acrylic shelf, but I was able to remove it with my finger.

The Poster Putty is less noticeable than the Velcro Dots which is nice! 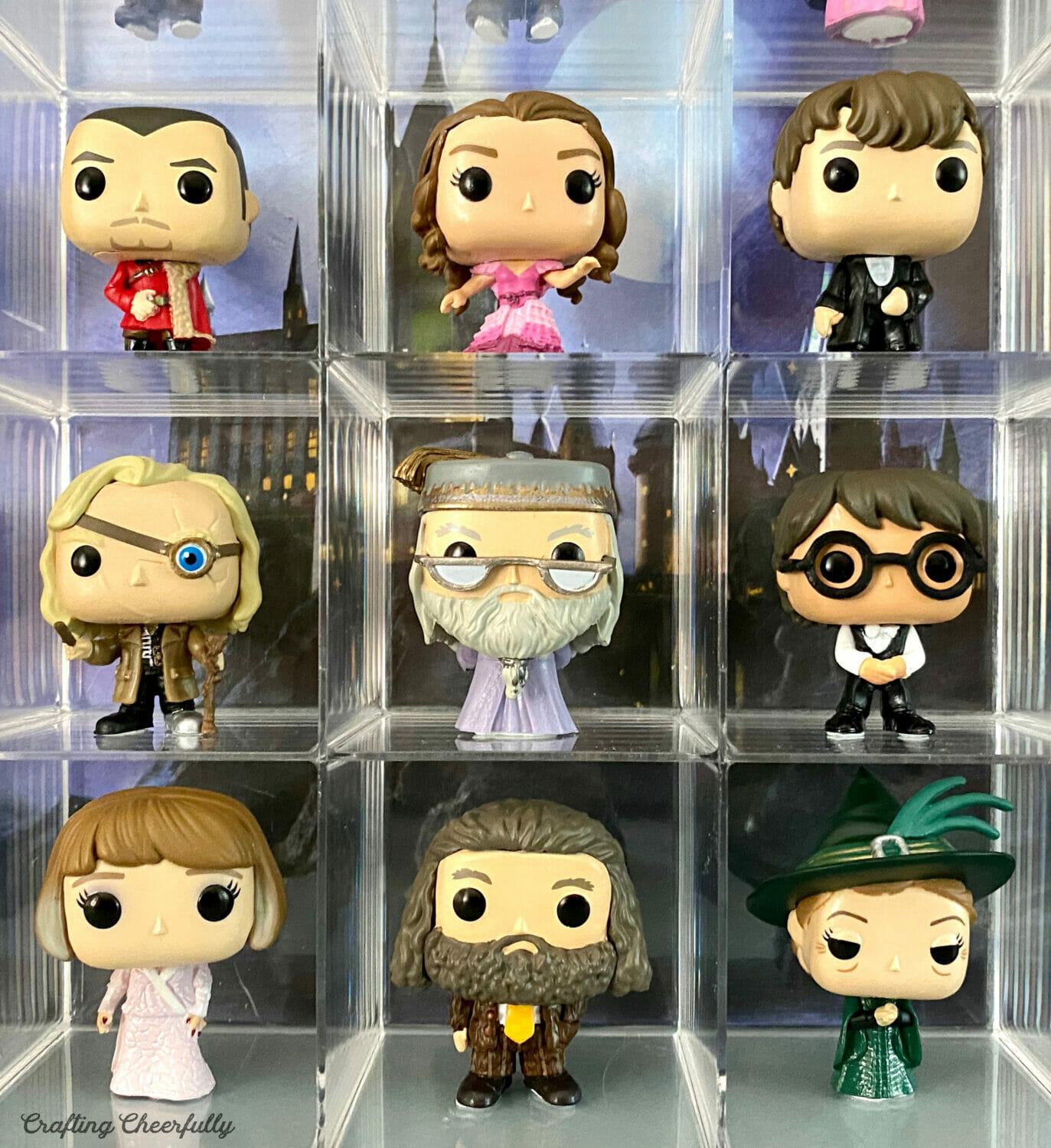 I figured out where I wanted to put each Funko Pop before starting to attach them. It’s fun to organize them. I tried to keep the characters who went to the ball together next to each other in the case. This year’s Advent Calendar had less duplicates with just two Harrys and two Rons. 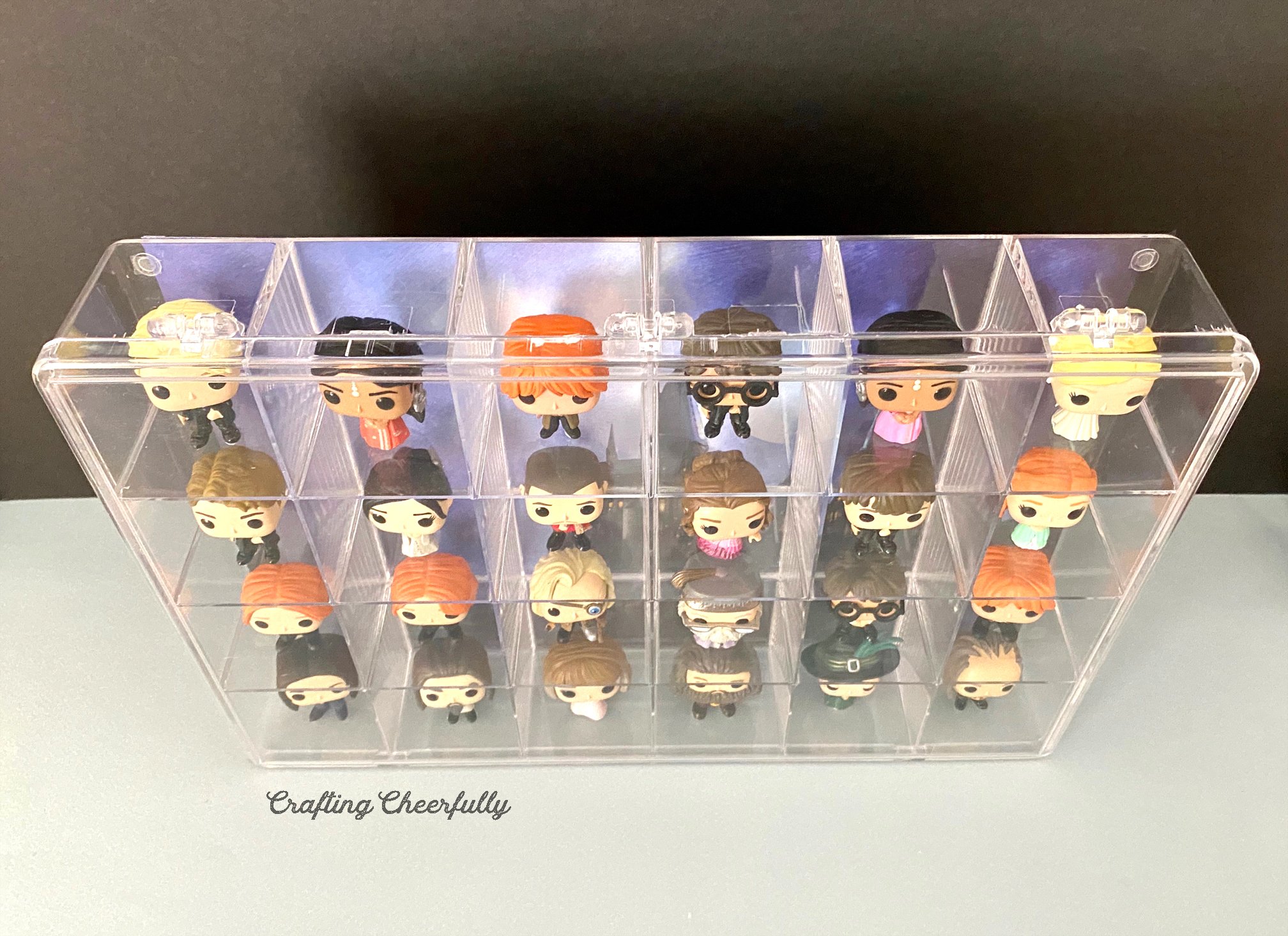 The lid to the case opens up and does require you to lift the entire case up in order to open it. The lid also creates a little lip at the bottom but my case was still sturdy without any problems. I thought about adding a little felt or something to the back of the case to make it more level, but I opted not to since it’s standing up just fine. 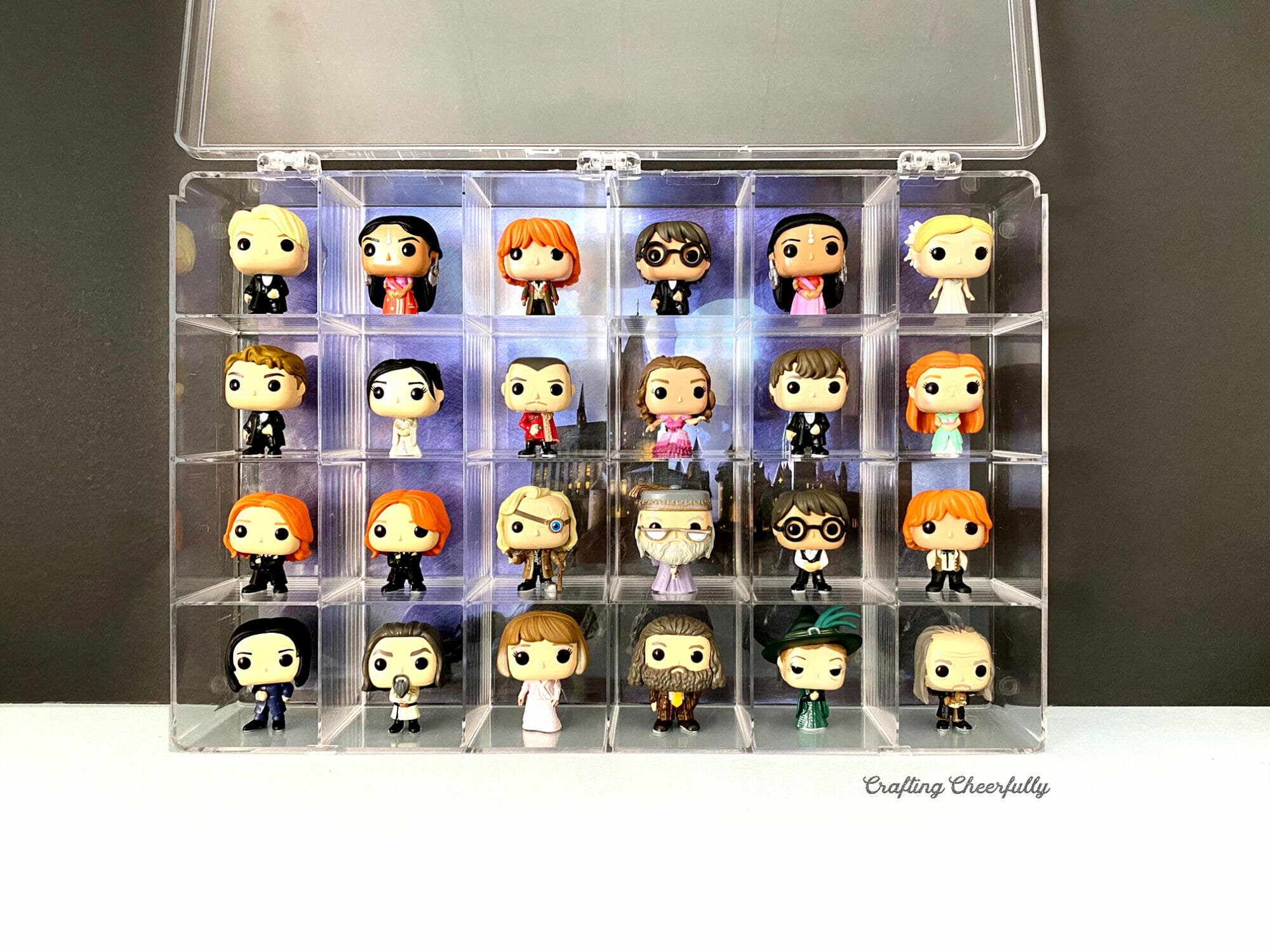 I hope this tutorial was useful for anyone else wanting to make their own display case! Check out my other fun Harry Potter crafts and have a happy Harry Potter day! :) 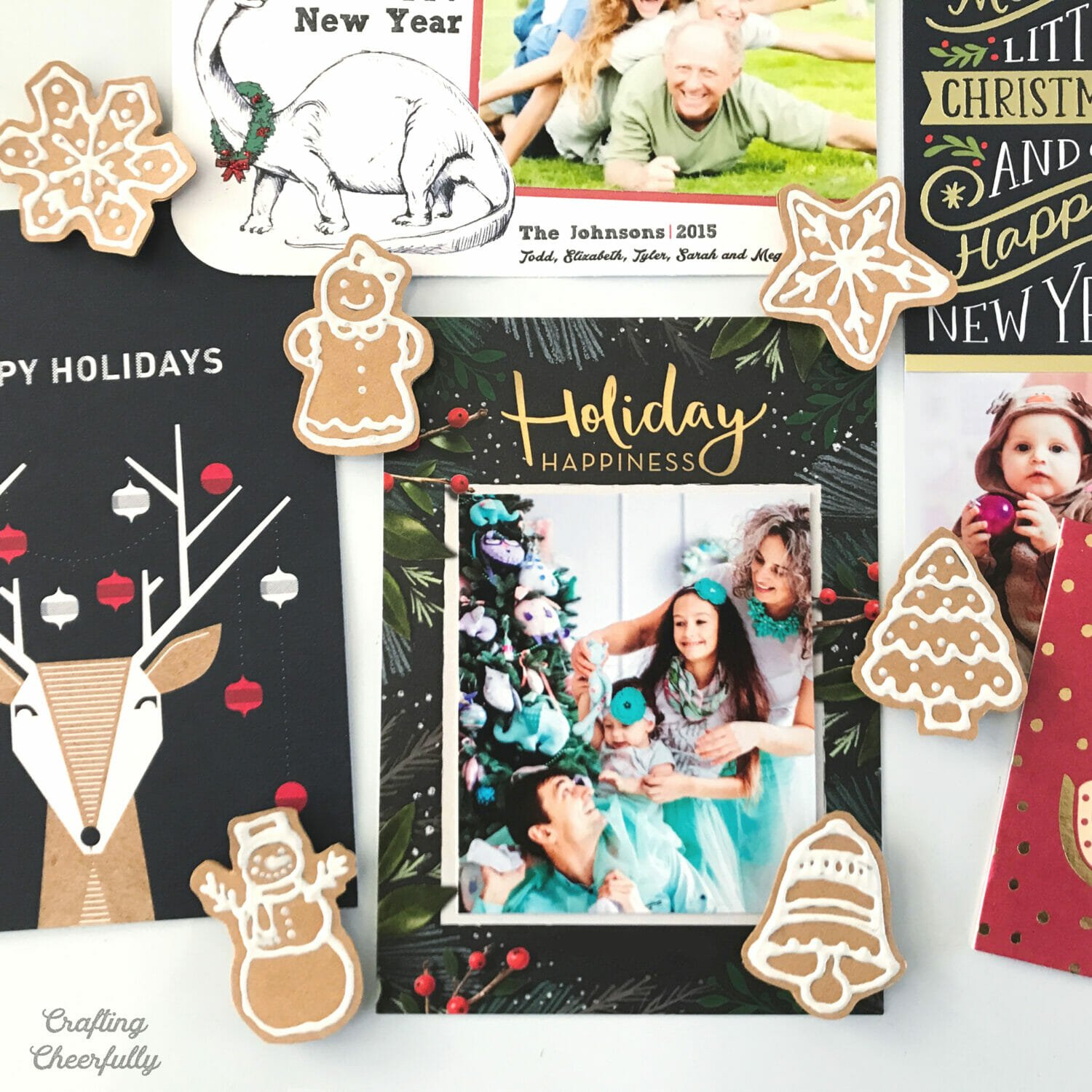 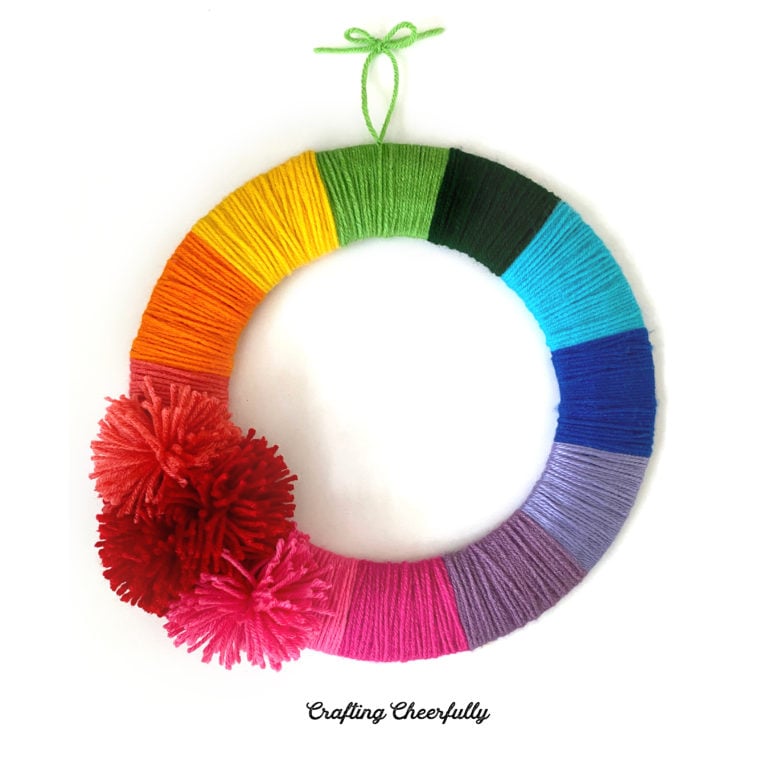 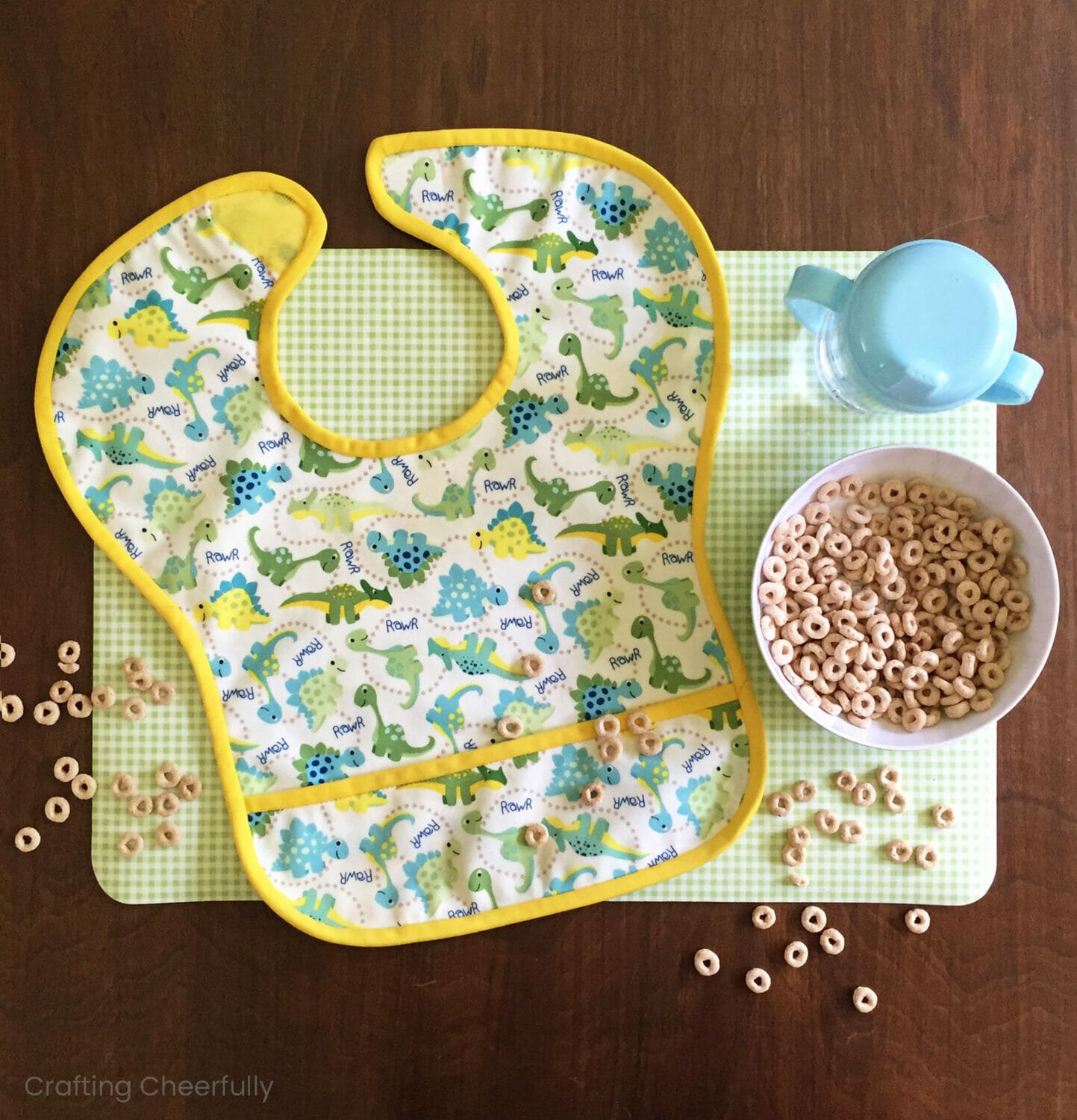 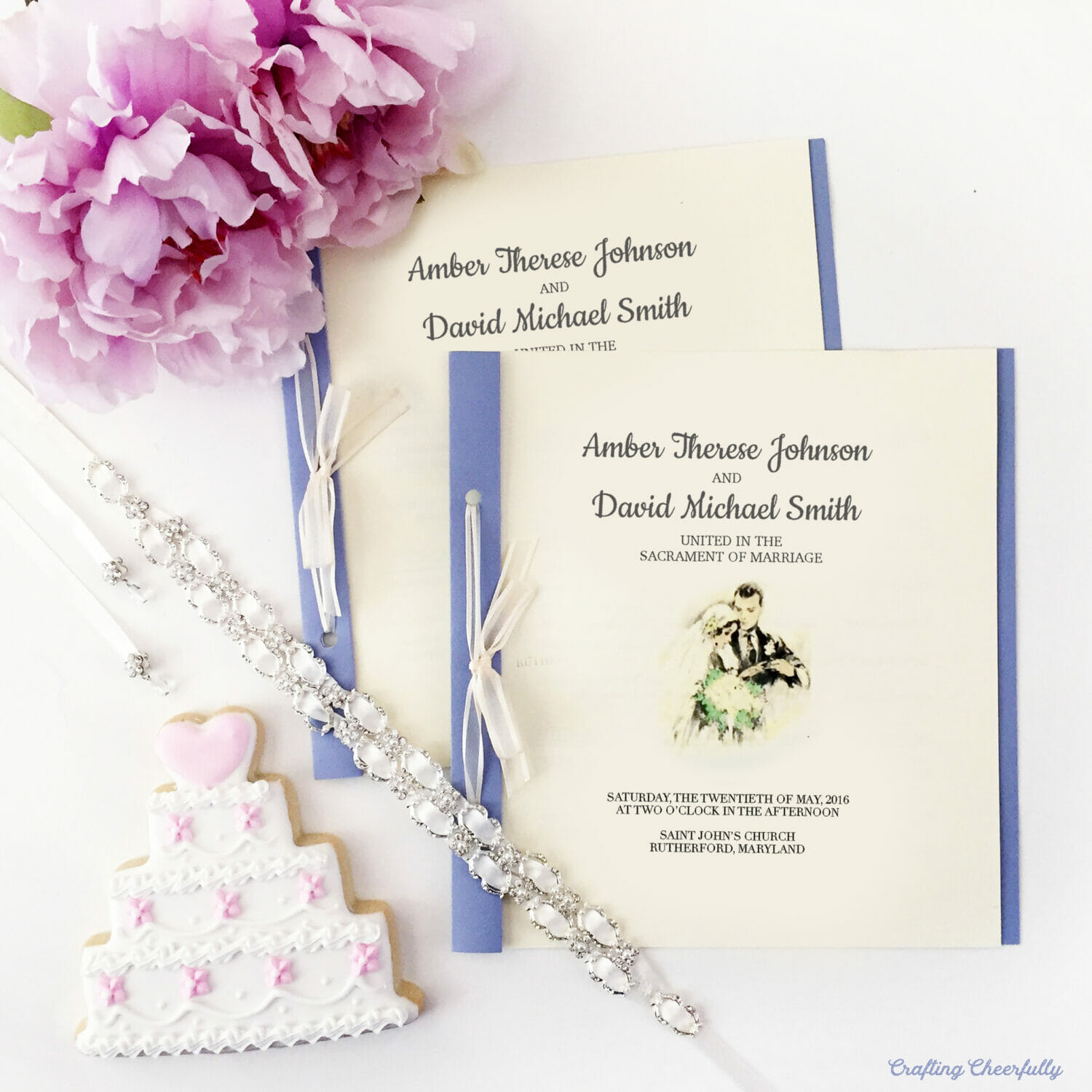 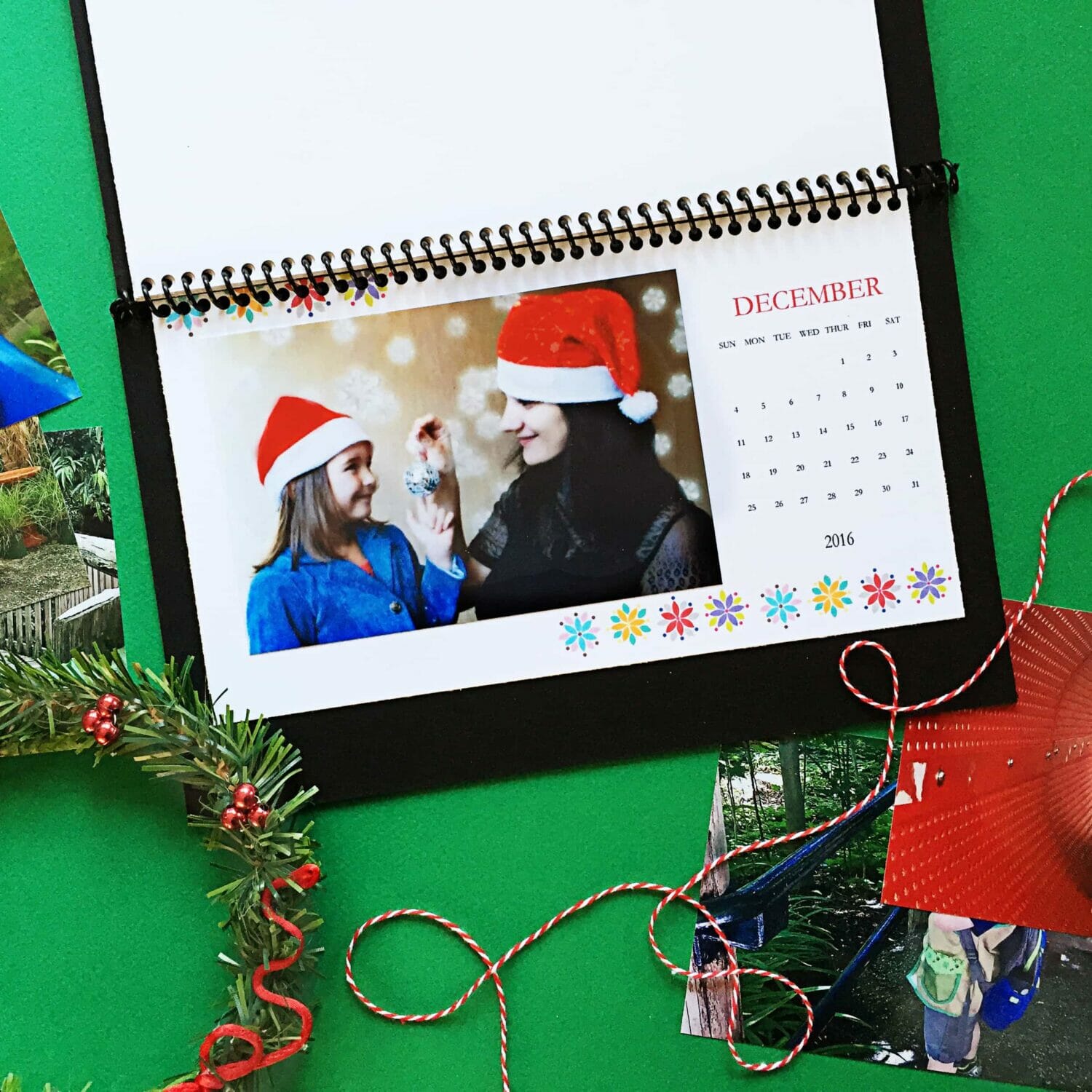