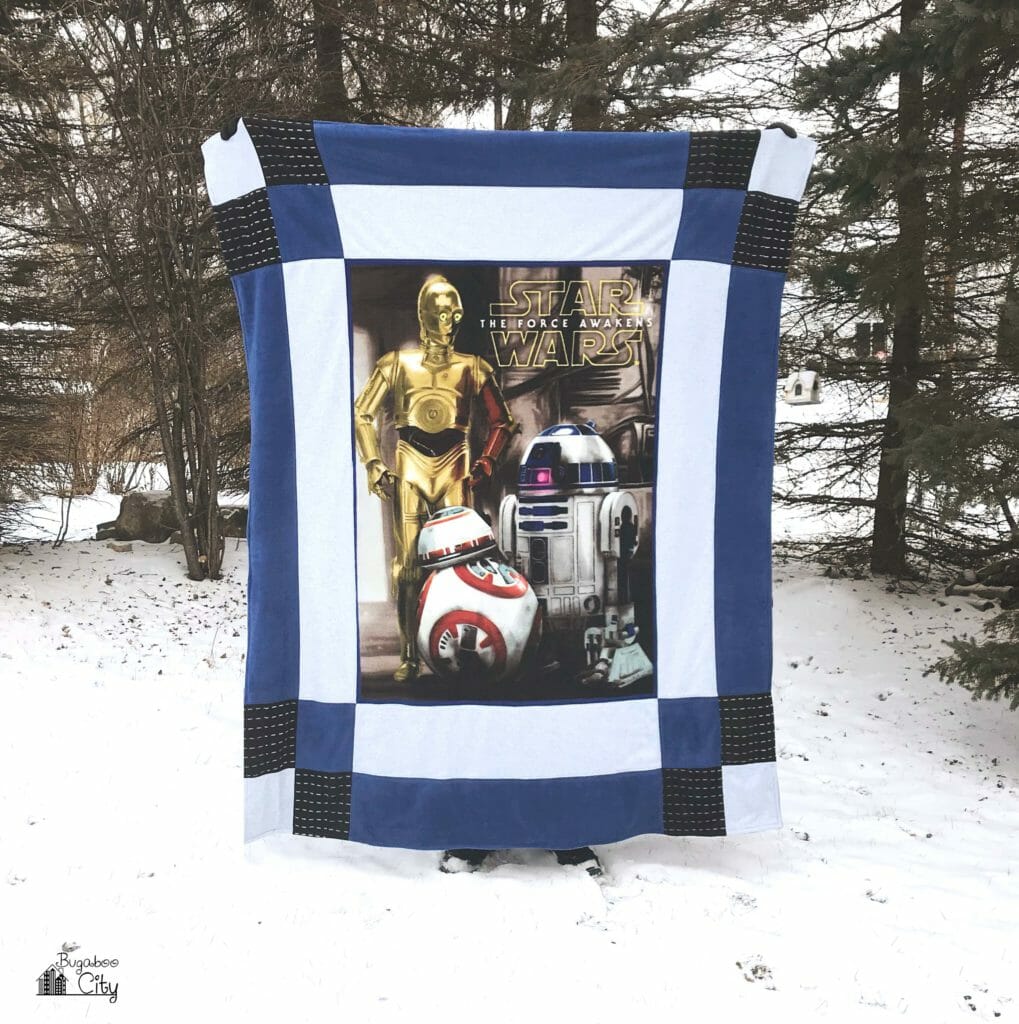 Good morning! Today I am excited to share my latest sewing project with you – this Star Wars Fleece Quilt! It’s super cozy and reversible! I made this for my son as a Christmas gift since he really needed a larger blanket for his bed. After he grew out of his toddler blanket, he started using a fleece blanket we had, one of those no-sew fleece tie blankets. He loves how cozy the fleece is so I thought about making him a similar blanket, just larger. I’m not a huge fan of all those ties on the blanket, though, so I decided to create a fleece quilt with no ties using two no-sew fleece blanket kits from Joann Fabrics!

I love how the quilt turned out and it has been perfect on my son’s twin bed. One side has a picture of the Star Wars droids – which are his favorite and go really well with the Star Wars Pillows I made him last year – and the other side has the Millennium Falcon. 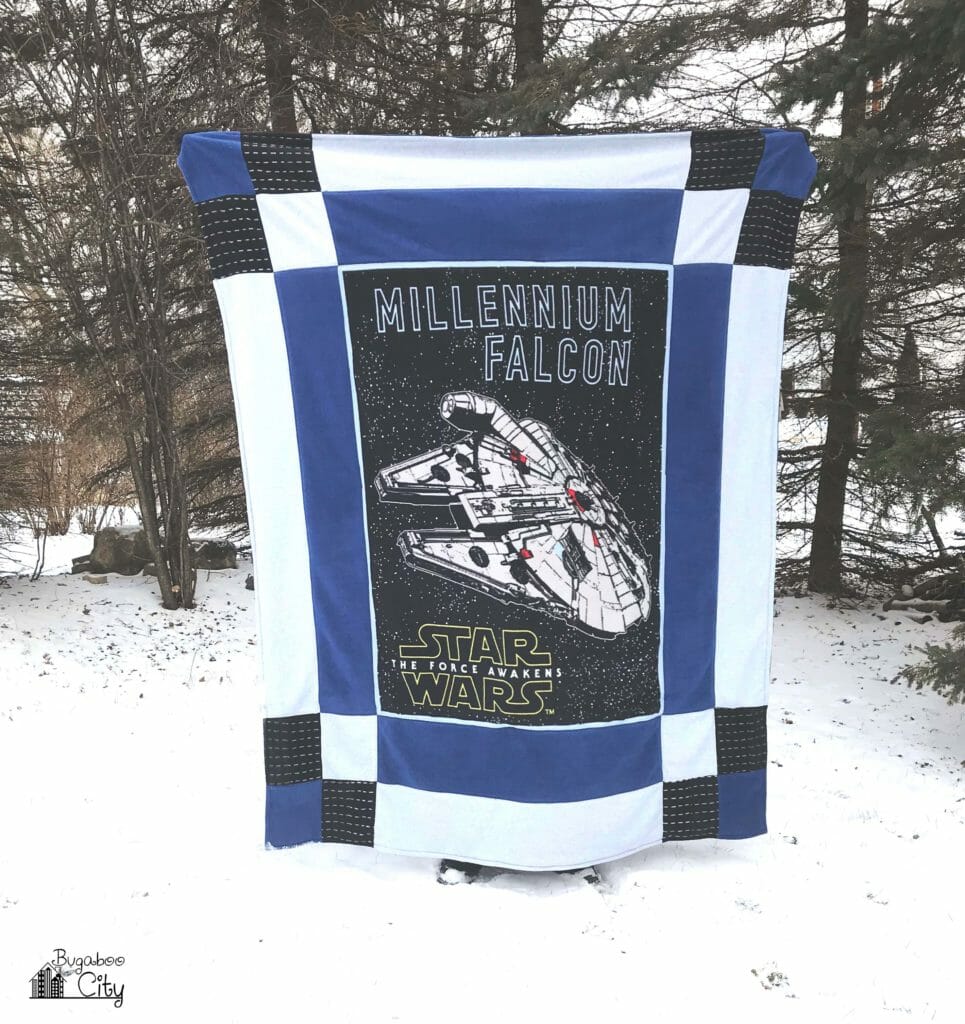 I created the quilt to be 65″ x 84.5″, about the size of a twin sized blanket if I were to purchase it. You could make this any size that works for you. I wanted it to be large enough to cover the bed, and my super tall four-year-old, but not too big since this was going to be his first large blanket!

I used two No Sew Fleece Throw Kits to create this quilt, both purchased from Joann Fabrics. 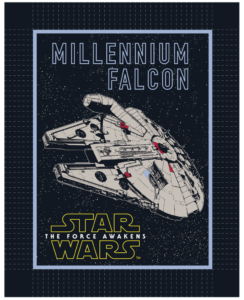 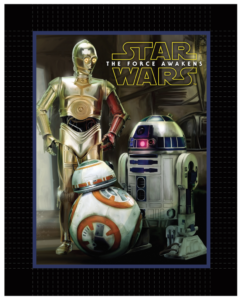 You can use the fleece backing that comes in each kit for the blue sections of the quilt – each backing piece is large enough to be one of the colors on one side of the blanket. You will need to purchase the grey fleece. Since I bought my fleece before doing my calculations (it was on sale so I went for it!), I ended up purchasing both the grey fleece and the blue fleece and used these instead. While I could have used the blue backings that came in each kit, I decided not to because they were not the same shade of blue and I figured I’d save them for another project!

For the black squares of the quilt, I used the border fabric that came with each no-sew kit – the fabric around the edges that has the dashed cutting lines printed on it. This was black for both kits so it worked out well!

Below you can see the plan I made for each side of the quilt. I kept it simple, since I don’t usually make quilts, and I started this project the week before Christmas so it needed to go quickly!

I have the pattern I created, with all of the dimensions available to download at the end of this post. 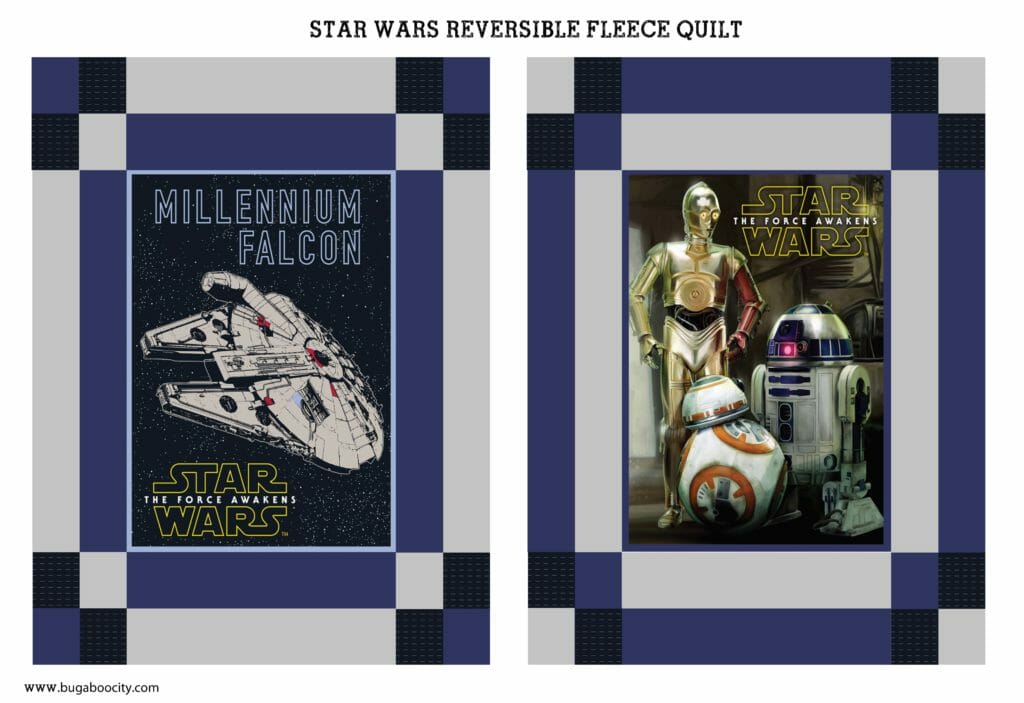 The first thing I did was to pre-wash all of my fleece fabrics. Then I cut everything out following my cut list. I included the cut list I made on the pattern to make things easy. Once all of my blue and grey pieces were cut, I cut out the large Star Wars pictures, leaving about 1/2″ all the way around the border. I wanted to keep the thin borders that came around each picture because they framed the pictures so nicely.

The most difficult pieces to prepare were the small black squares. I wanted them to measure 7″ wide by 8″ tall, so I needed to cut pieces that were 8″ x 9″ to include my 1/2″ seam allowance. This was wider than the blanket borders, which were just about 5.5″ wide. To make the squares large enough, I stitched two black borders together and then cut my 8″ x 9″ pieces out. This was time consuming, but I think it was worth it because they add a lot to the quilt and I really liked the pattern the dashed lines created. I could have also just purchased a black fleece to use for these pieces, but it was nice to use what I had instead of buying more. 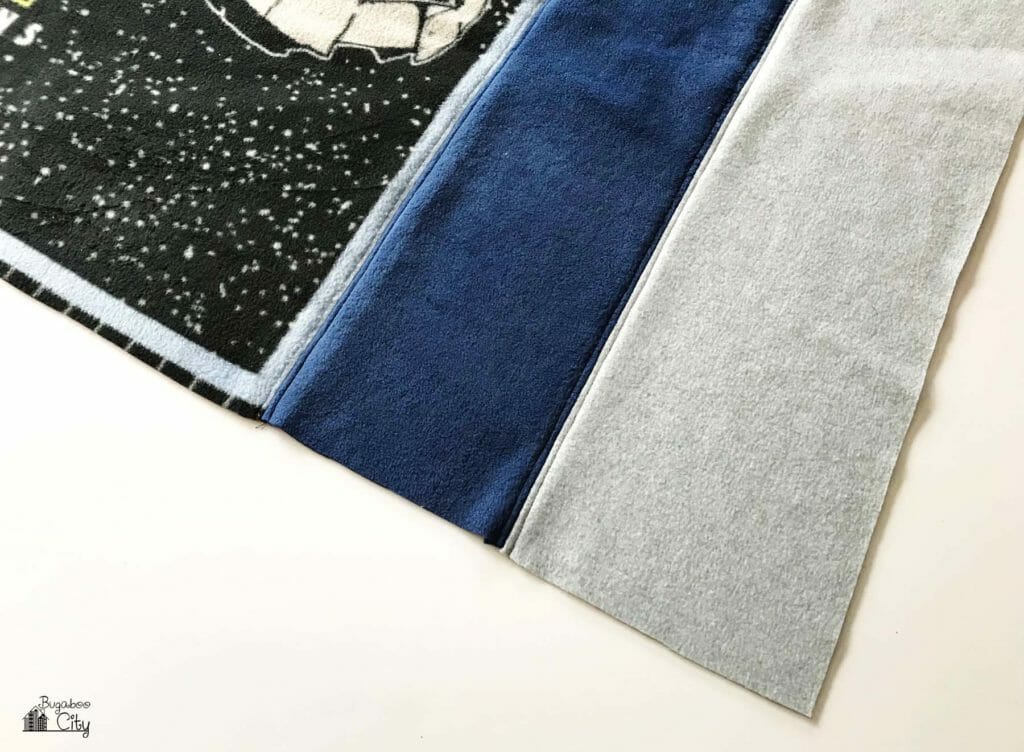 Once all of the blue and grey pieces were stitched together, I attached the long sides to each large Star Wars picture following my pattern. In the picture below, you can see that I stitched about 1/8″ inside the border that was all around the picture to ensure I didn’t have any black fleece showing from the seam allowance. 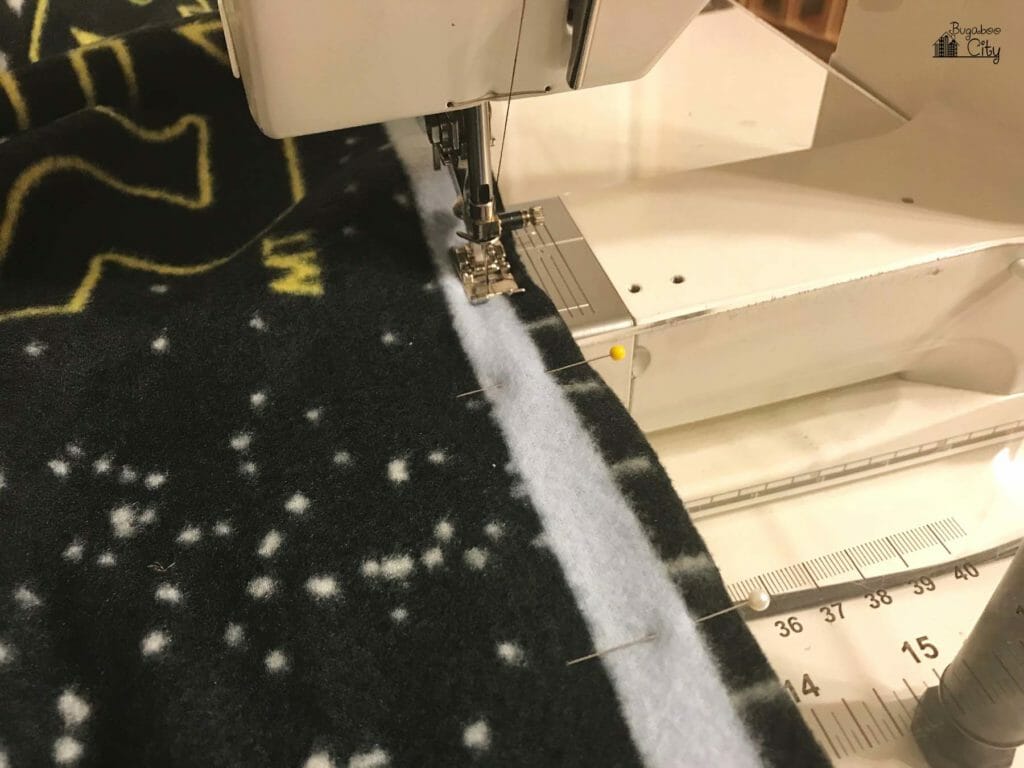 I pressed each seam open and top-stitched along each side of the seam at 1/8″. I did this from the right side of the fabric making sure my seam allowances were flat underneath. This is the process I used for every seam – so each seam was basically stitched three times. 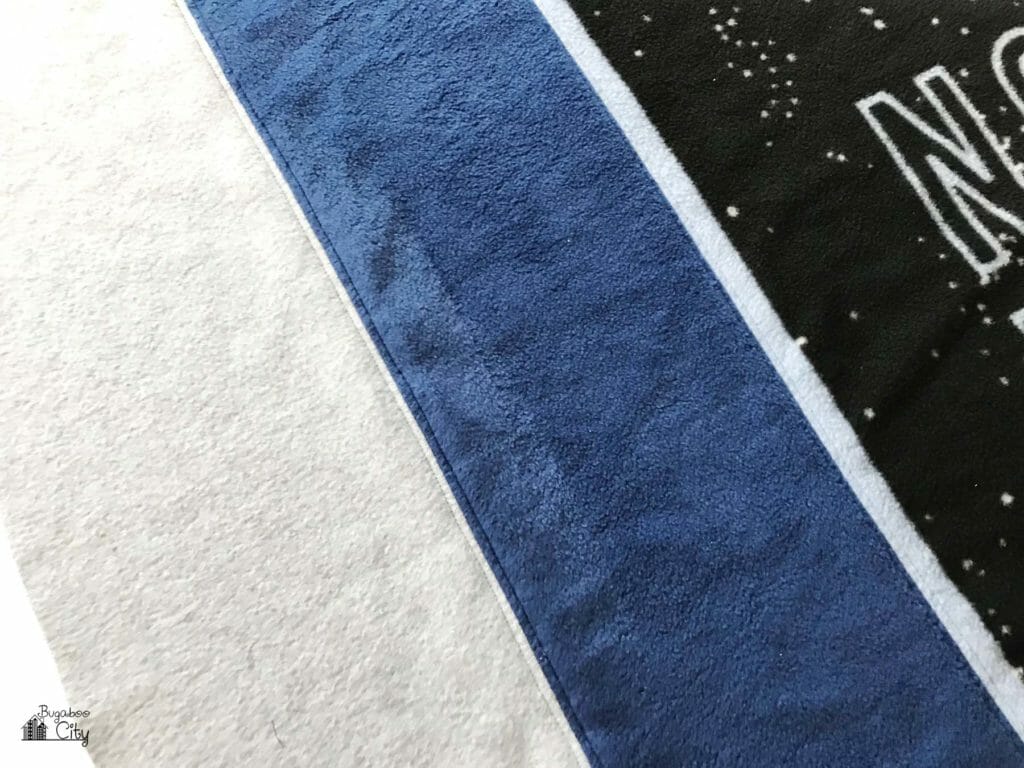 To create each of the corner sections, I stitched together four small squares using the same seam technique as I did above. You can see in the pictures how each of my black squares is made up of two pieces. I tried to line up the dashes the best I could when sewing these pieces together. 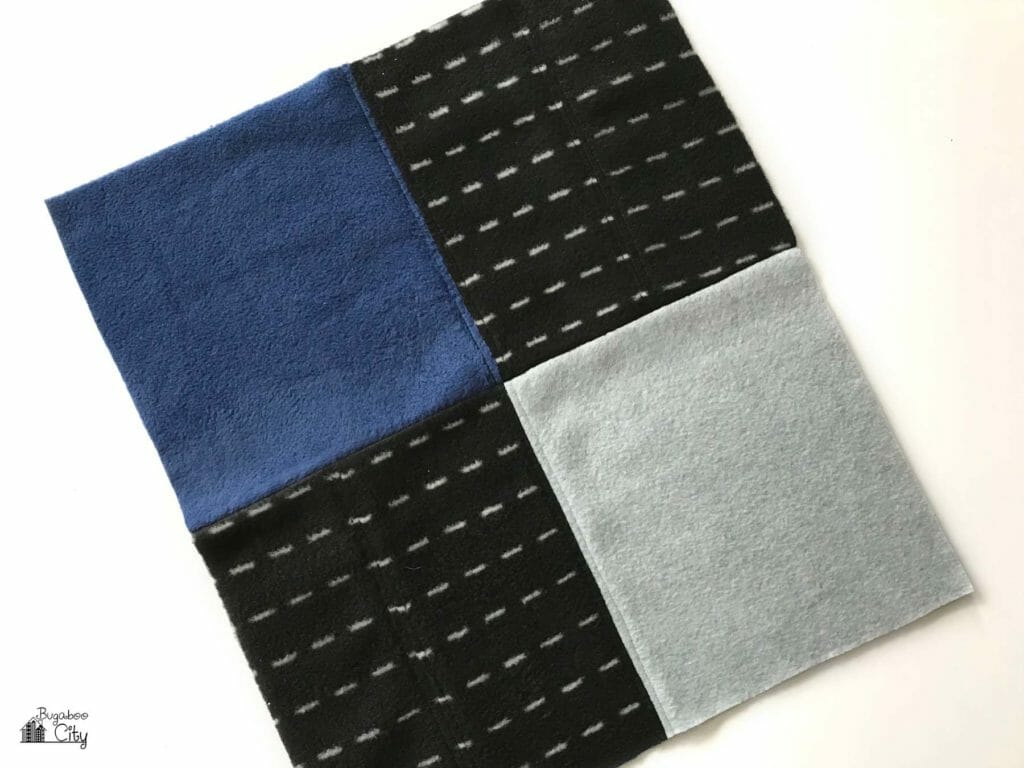 A few tips for sewing these corner sections – 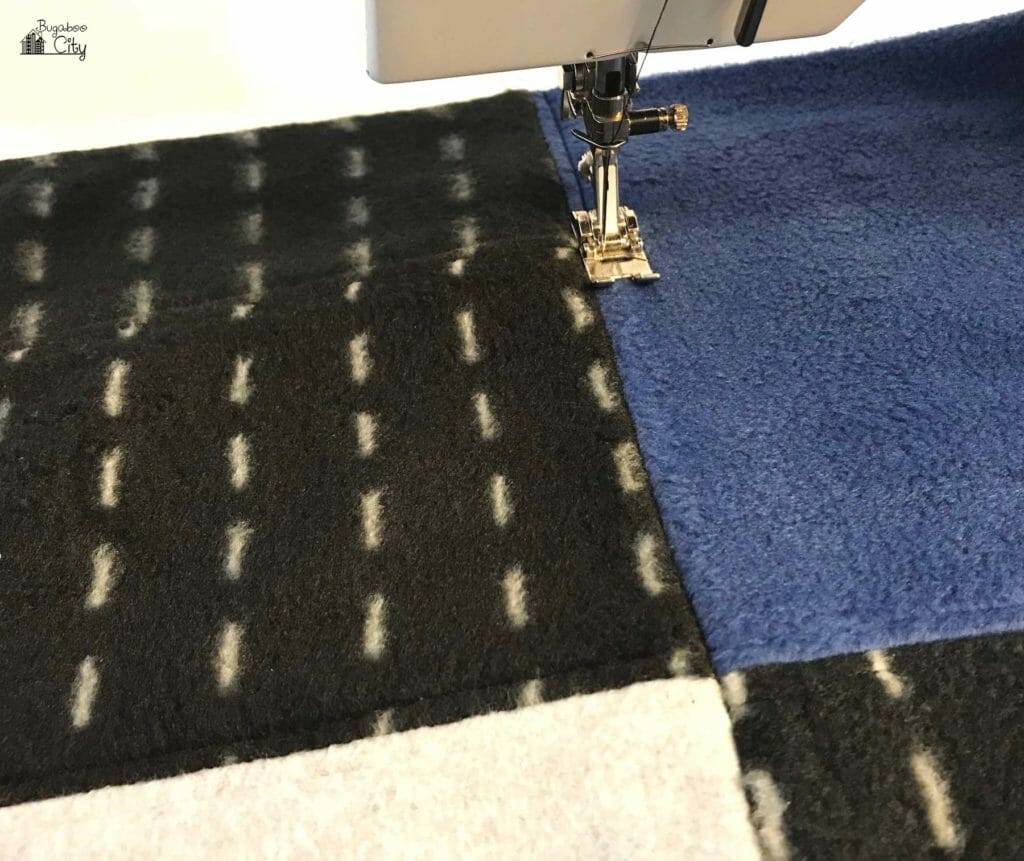 Once all 8 corner sections were completed, I was ready to attach them. I stitched each corner section to the top and bottom grey/blue sections that had not been attached to the Star Wars pictures yet. Then I stitched those onto the quilt, being mindful to match seams. 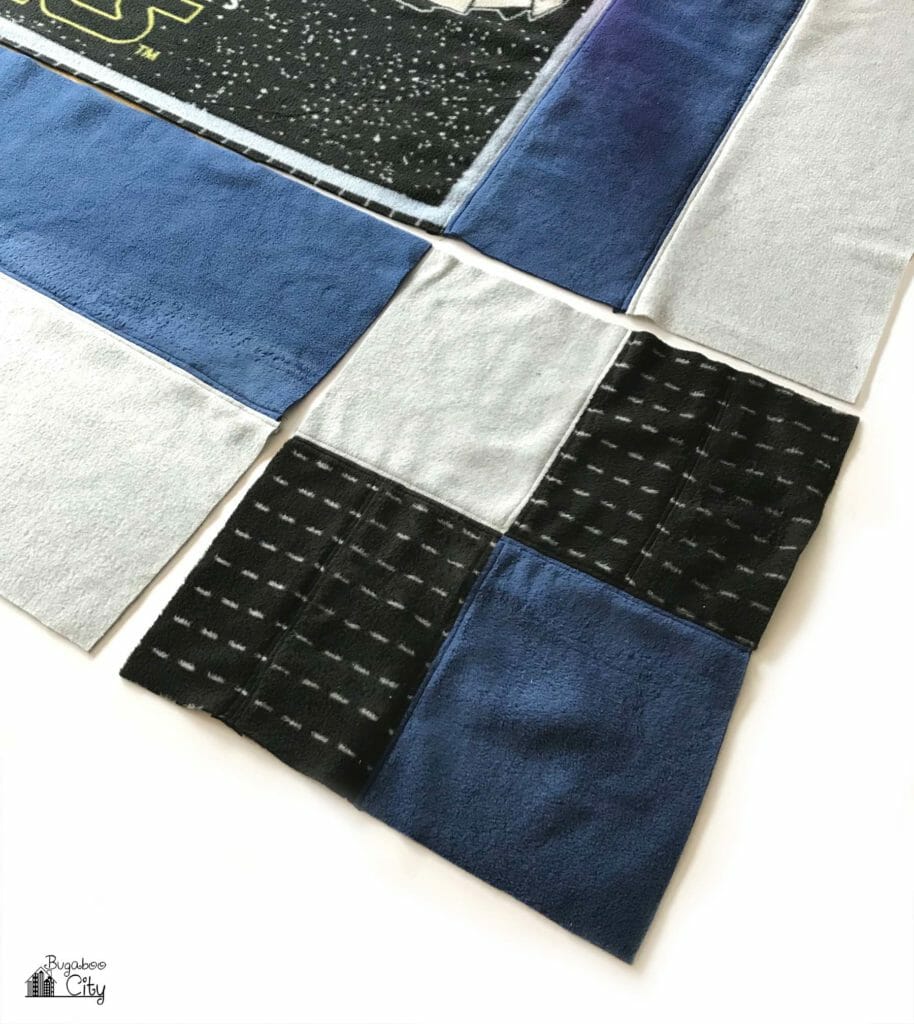 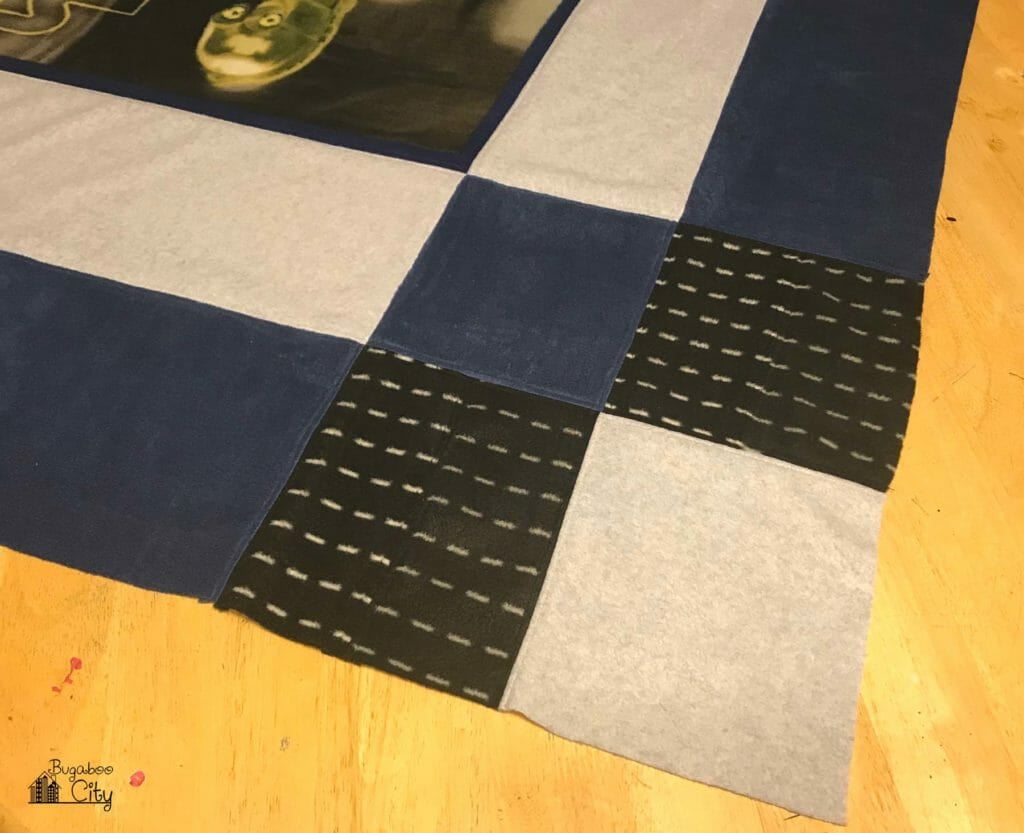 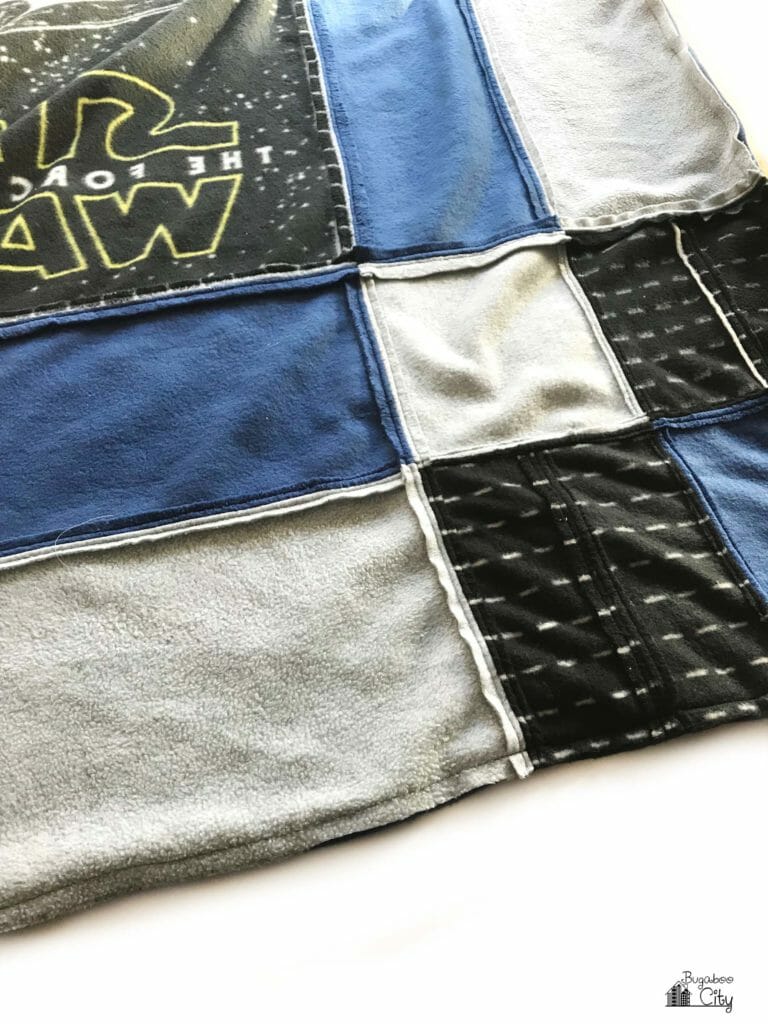 I left an opening on the bottom edge so I could flip the quilt right side out. 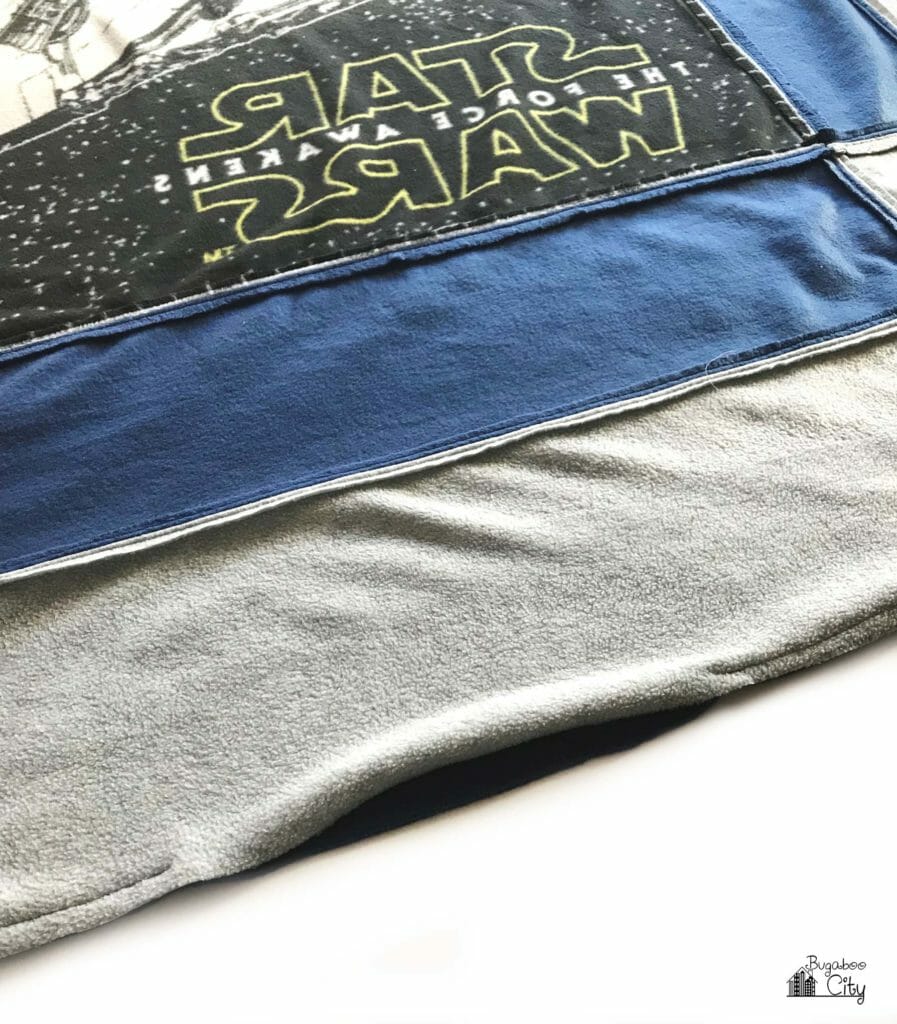 After flipping the quilt right side out, I top stitched around the entire quilt at about 3/8″. Again, I had to switch my thread and bobbin colors as I sewed. I tried to do the top-stitching in sections to make it more efficient. For example, I started with grey thread and a blue bobbin and did every section that needed that thread combination, then went on from there. A bit putsy, but I’d gone through the work of top-stitching with matching thread for the whole quilt up until this point, so I didn’t want to stop now! 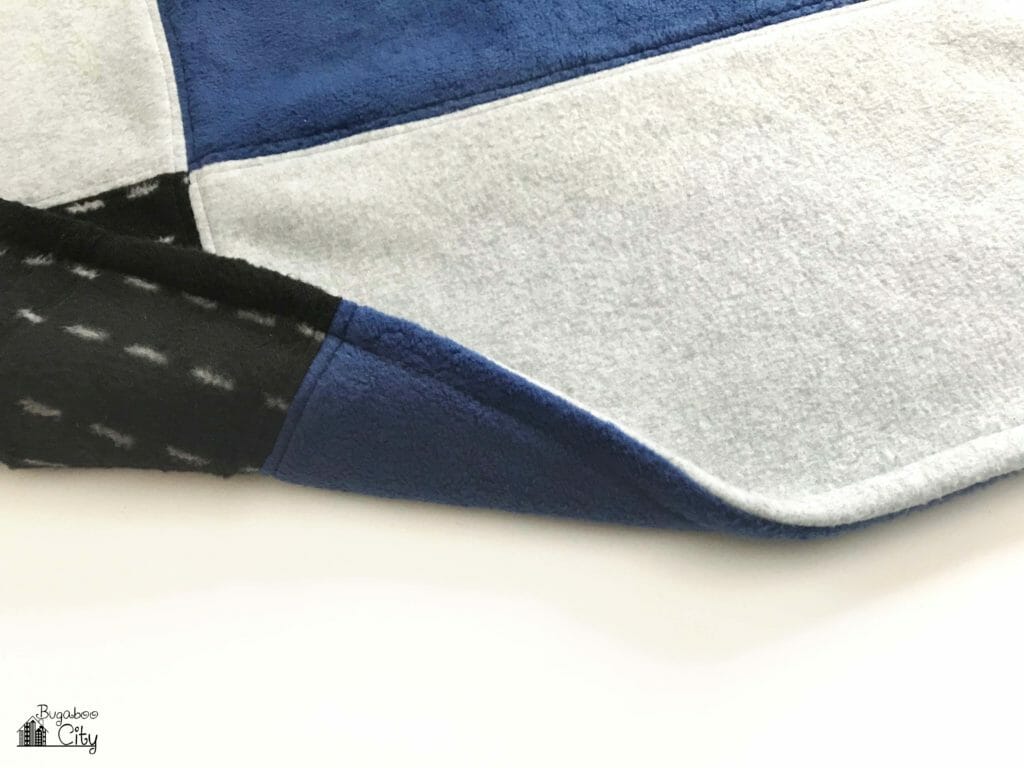 The final thing I did was to go back and tack the two quilt layers together in a few places. I tacked them using my machine and just stitched back and forth about a 1/2″ at each point and in the center of each side. It was a bit tricky because, again, I had to switch thread and bobbin colors, but I tried to do it along a seam line so it was hidden. You could also do this by hand for a bit more control! 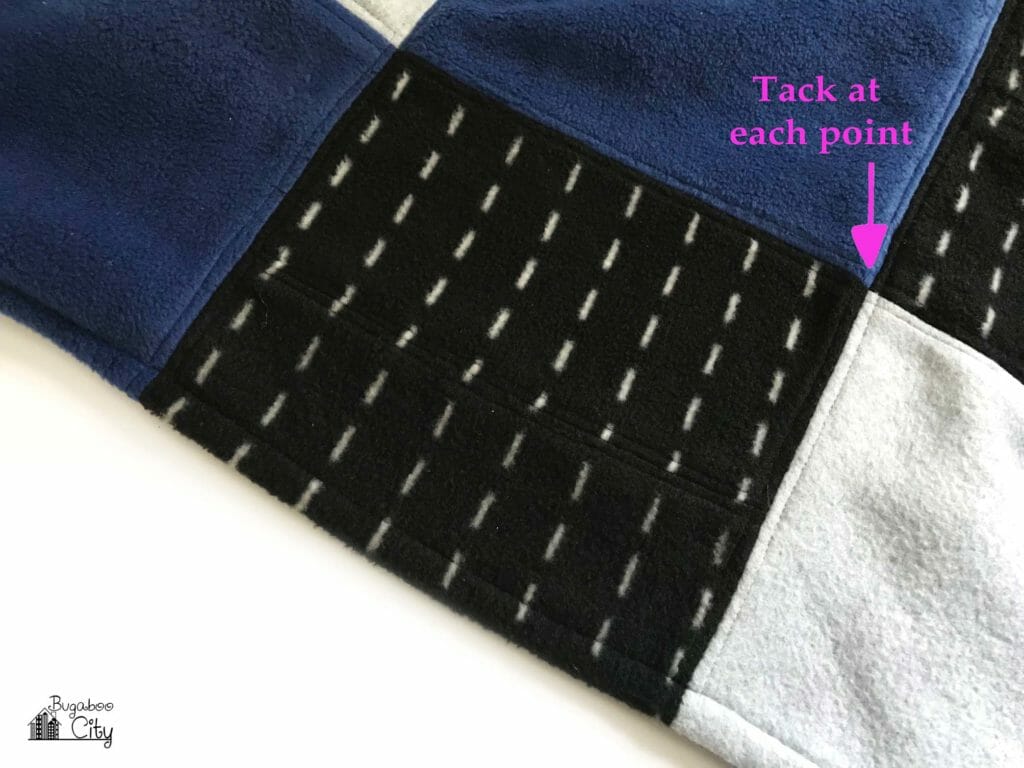 I love how this fleece quilt turned out! The images that came with the no-sew fleece kits were so cool and I love that I was able to use them without all of the annoying fleece ties! My son loves that it is reversible and he can switch it around! This was the second huge blanket I worked on in December. The first was a large weighted blanket for my father-in law. I’ll be sharing that blanket later this month! :)

Do you enjoy cleaning and organizing after Christm

This DIY pencil holder adds so much color and happ

We set up our January calendar yesterday, yay! Dre

The free monthly calendar cards from 2019 are stil Do you enjoy cleaning and organizing after Christm

This DIY pencil holder adds so much color and happ

We set up our January calendar yesterday, yay! Dre

The free monthly calendar cards from 2019 are stil