Create your own Harry Potter Birthday cupcake and treat box! Learn how to create a cupcake box and use my free printable Hedwig gift tags for a fun treat box and birthday surprise for a Harry Potter fan! 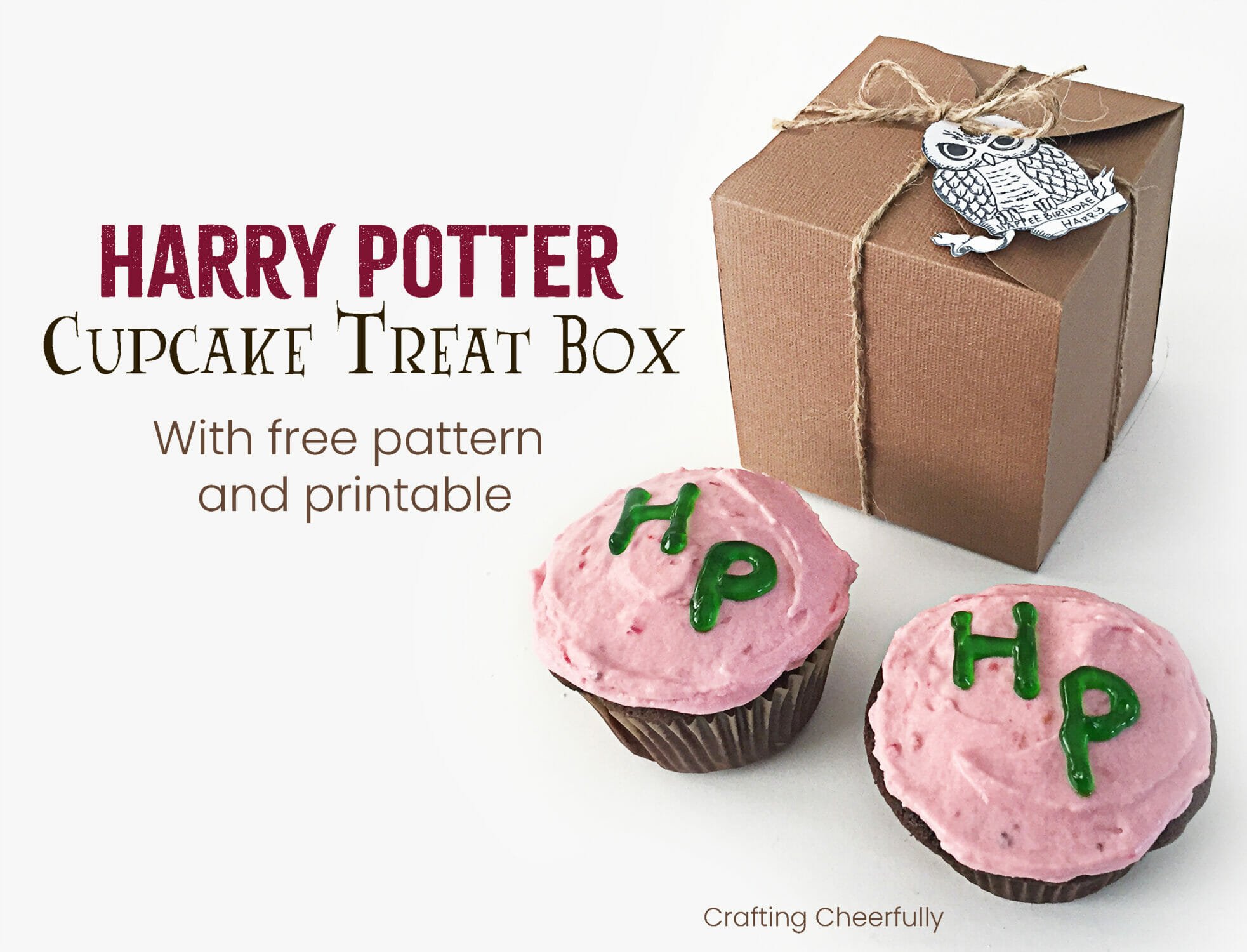 Hello Crafty Friends! This week on the blog I’m celebrating Harry Potter’s birthday with lots of fun themed craft ideas. Harry’s birthday is July 31st so the first craft I’m sharing is this fun Harry Potter Birthday Cupcake and Treat Box. This would be a great party favor or gift for a fellow fan – either way, you can’t go wrong with cupcakes and Harry Potter!

I styled the treat box to resemble the box Hagrid used to hold Harry’s cake in Harry Potter and the Sorcerer’s Stone – except I decided not to sit on it! The cupcake is a delicious chocolate cake with a fresh raspberry buttercream frosting with “HP” written on it green icing. It is a mini version of the “sticky chocolate” cake Hagrid made Harry. The original had pink frosting and the words “Happee Birthdae Harry” written on it in green icing, so this cupcake mimics the original cake. 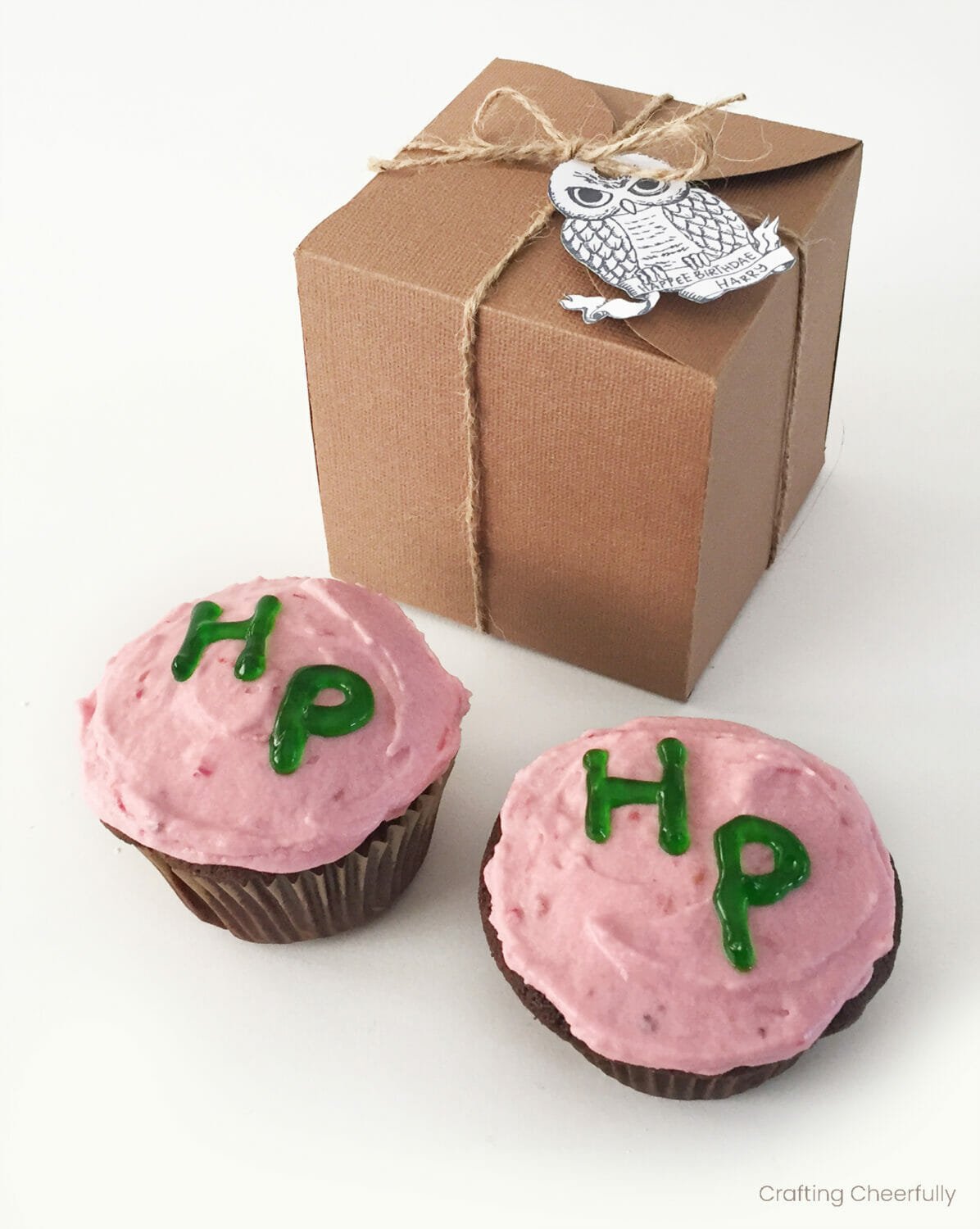 I’m sharing the template I made for the treat box along with the fun Hedwig owl gift tags I created. The gift tags are hand-drawn and include the words “Happee Birthdae Harry” written on the banner the owl is holding. I’ve included a second version of the gift tags without any writing on them, so you can customize the tags with your own text or name. 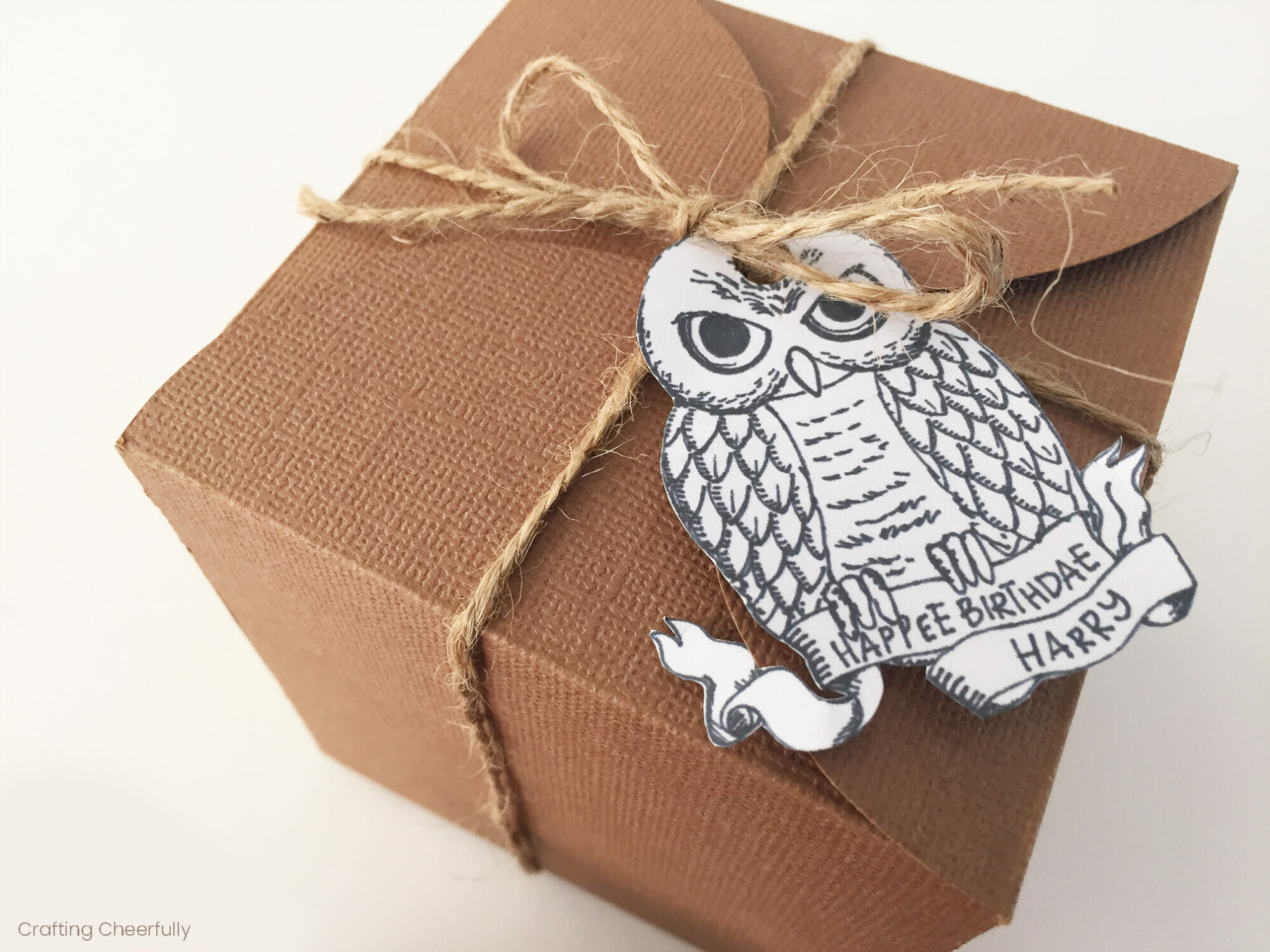 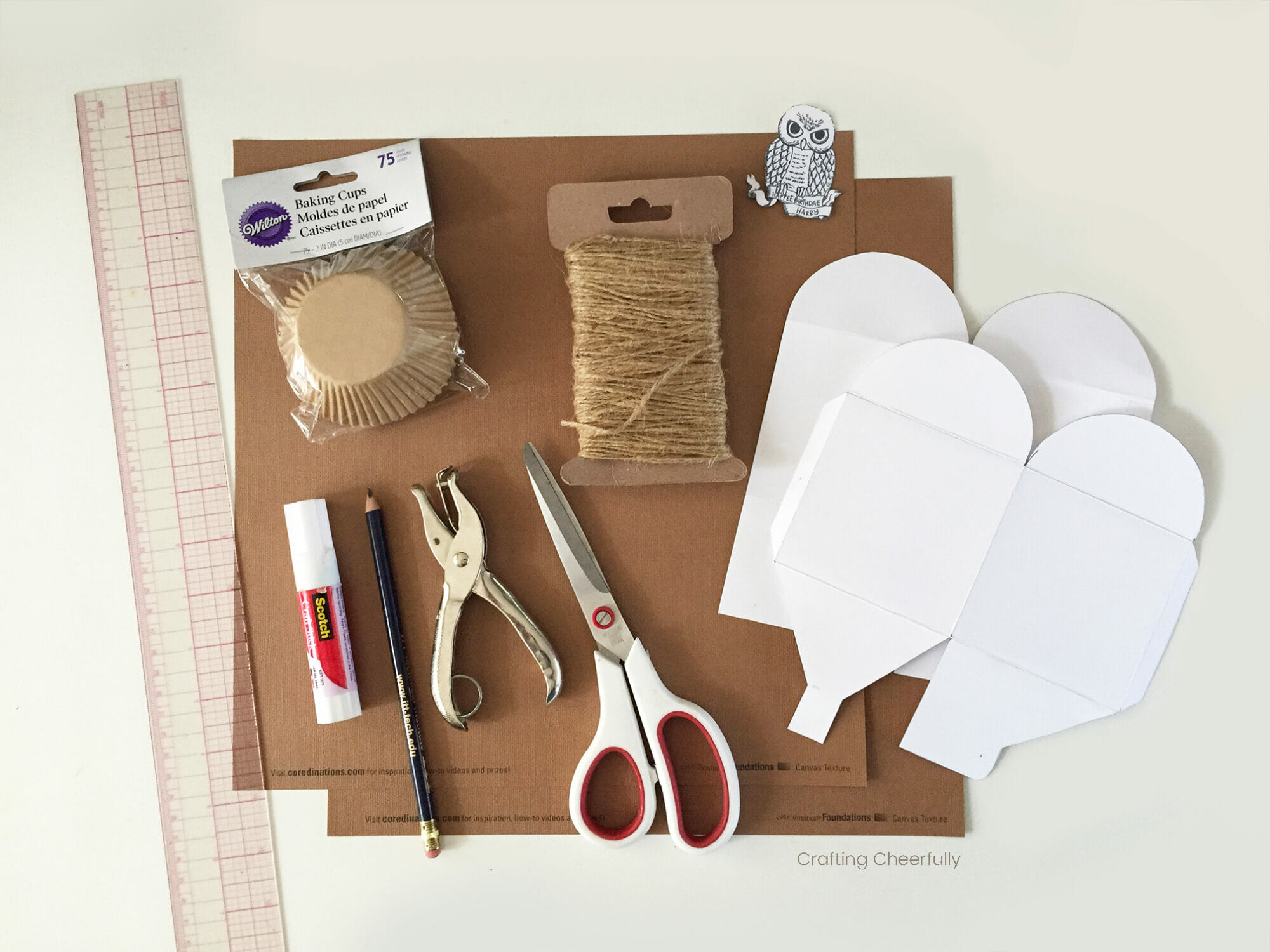 Step One: Trace the template on brown card stock. Print and cut out the free template and trace the three pieces onto brown cardstock. Use a ruler to connect the interior fold lines with lightly drawn pencil lines. 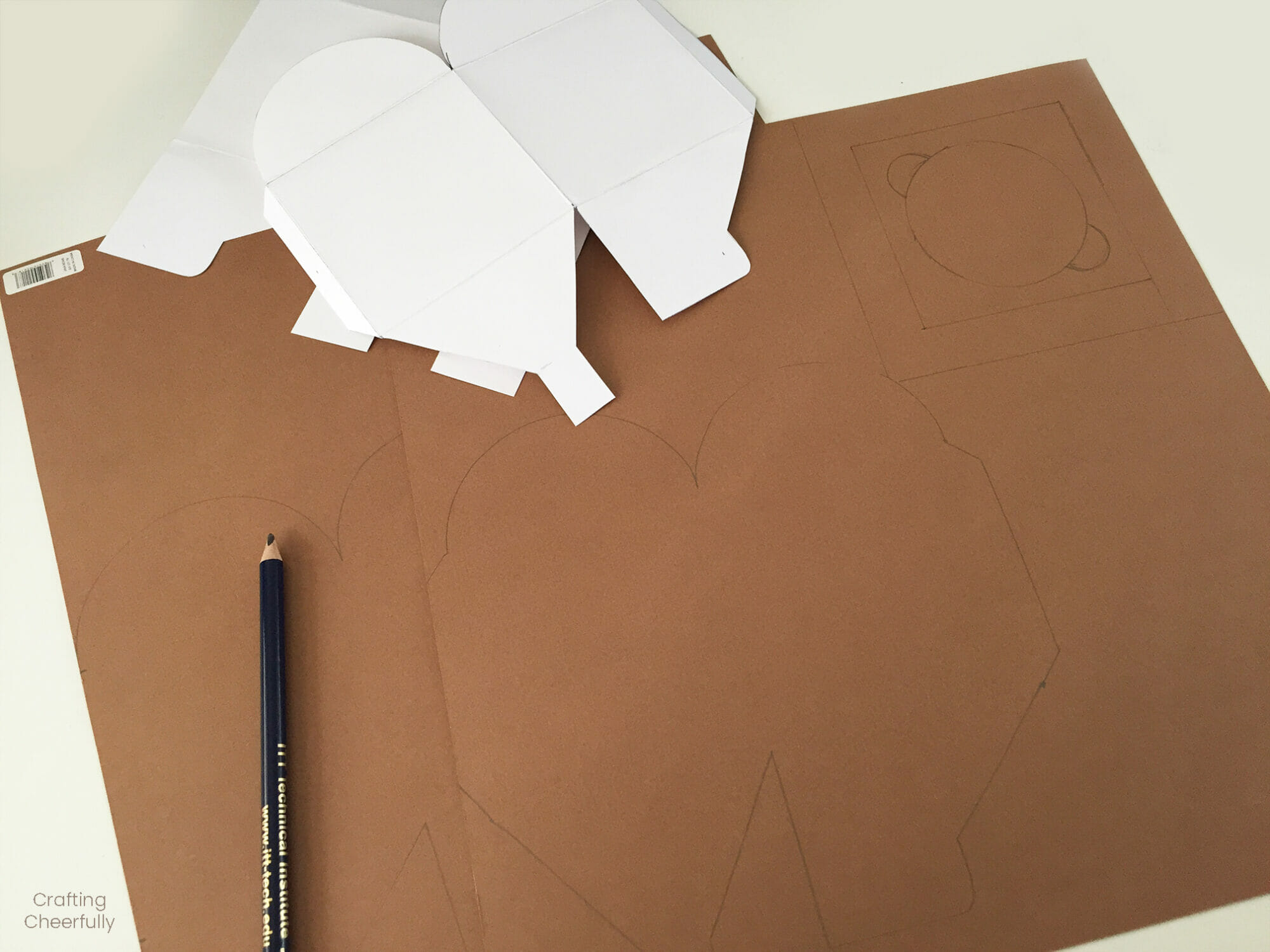 Step Two: Cut out the three pieces. To cut the interior of the cupcake holder piece, I poked a hole and then used my scissors to cut it out. 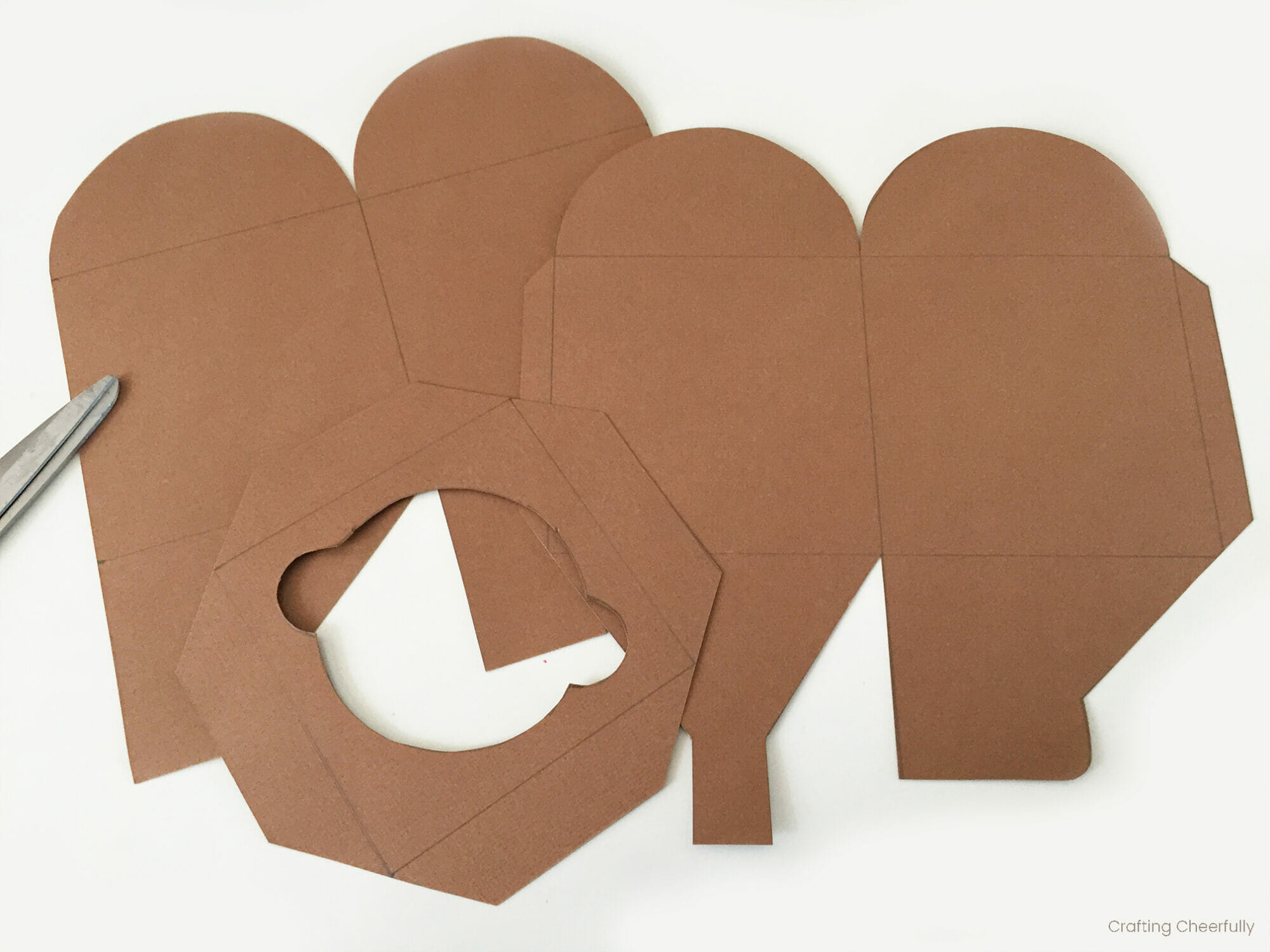 Step Three: Fold the edges of the box. You can score the lines using a scoring board and then fold along the lines. 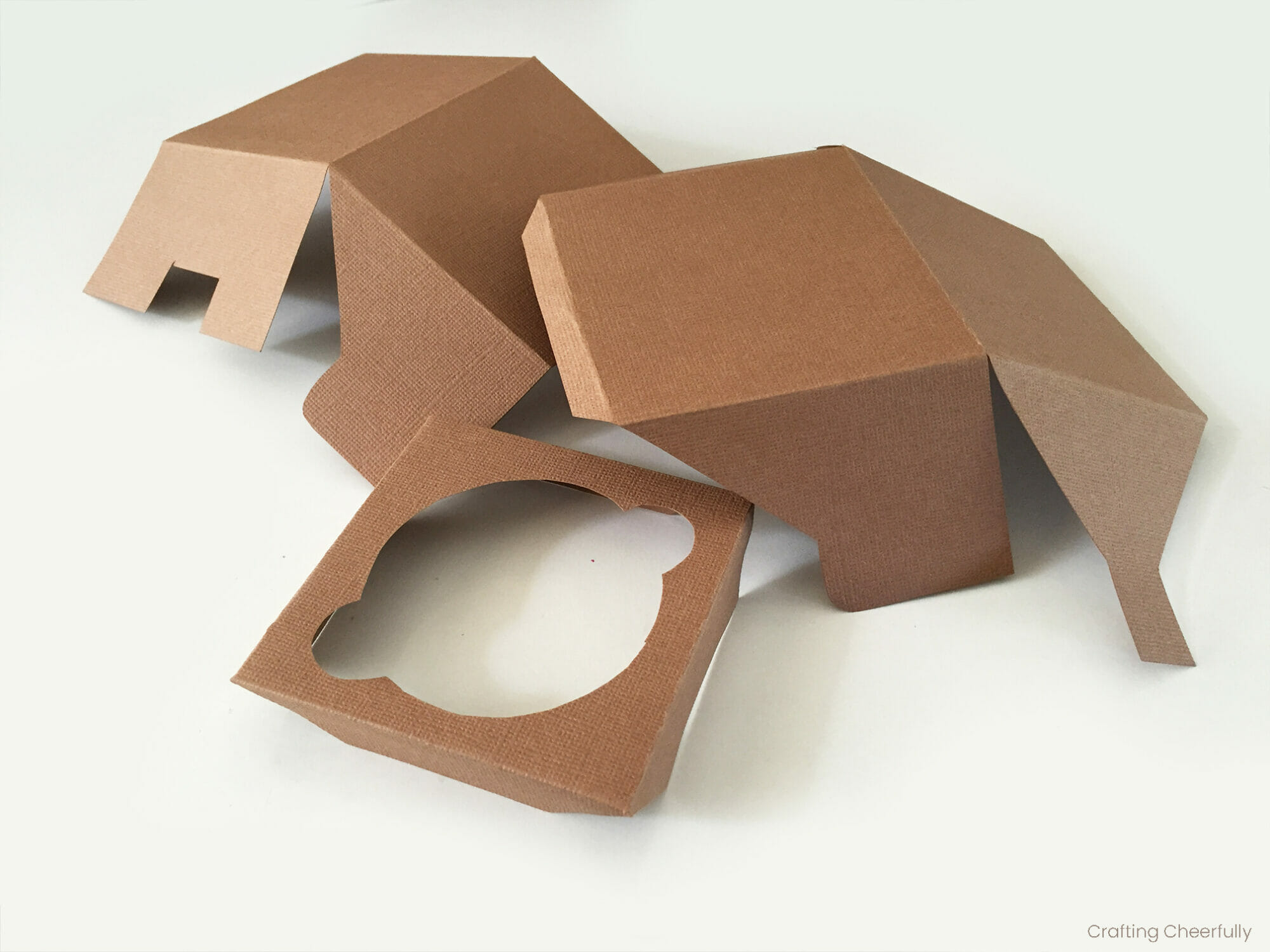 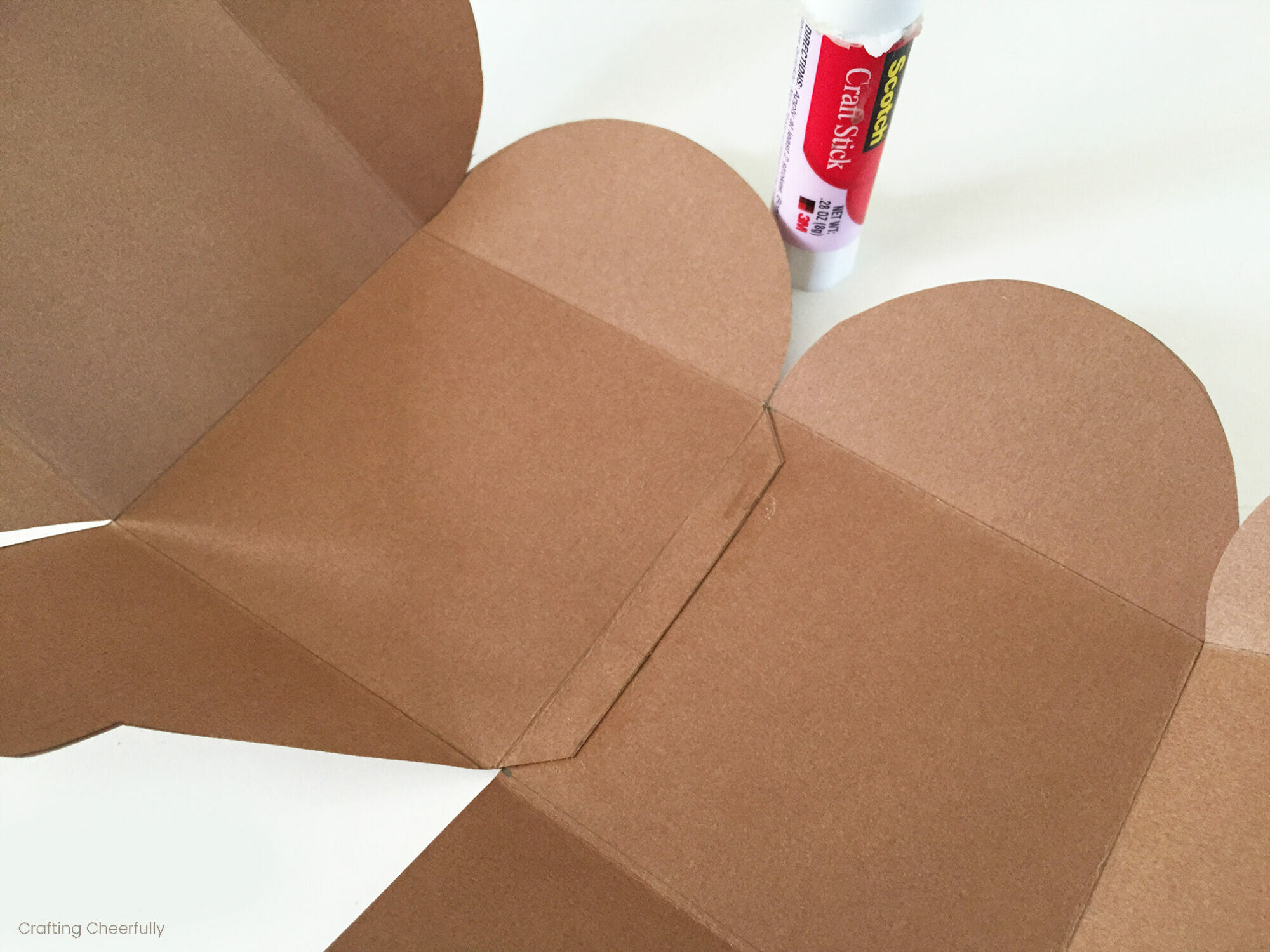 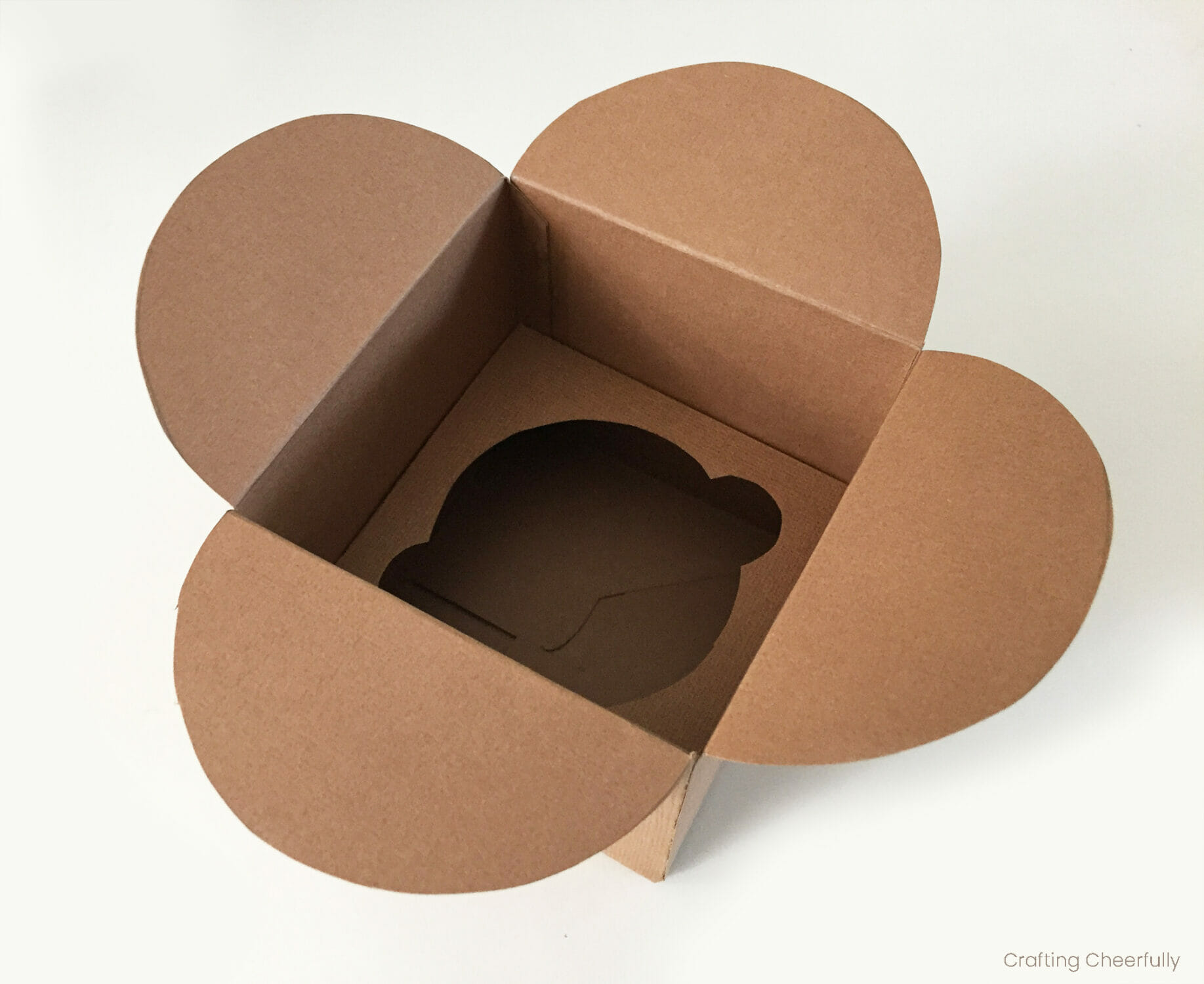 Step Six: Add the owl gift tag. Print the free Hedwig owl gift tag on white cardstock. Punch a hole in the top and use twine to attach it to your box! 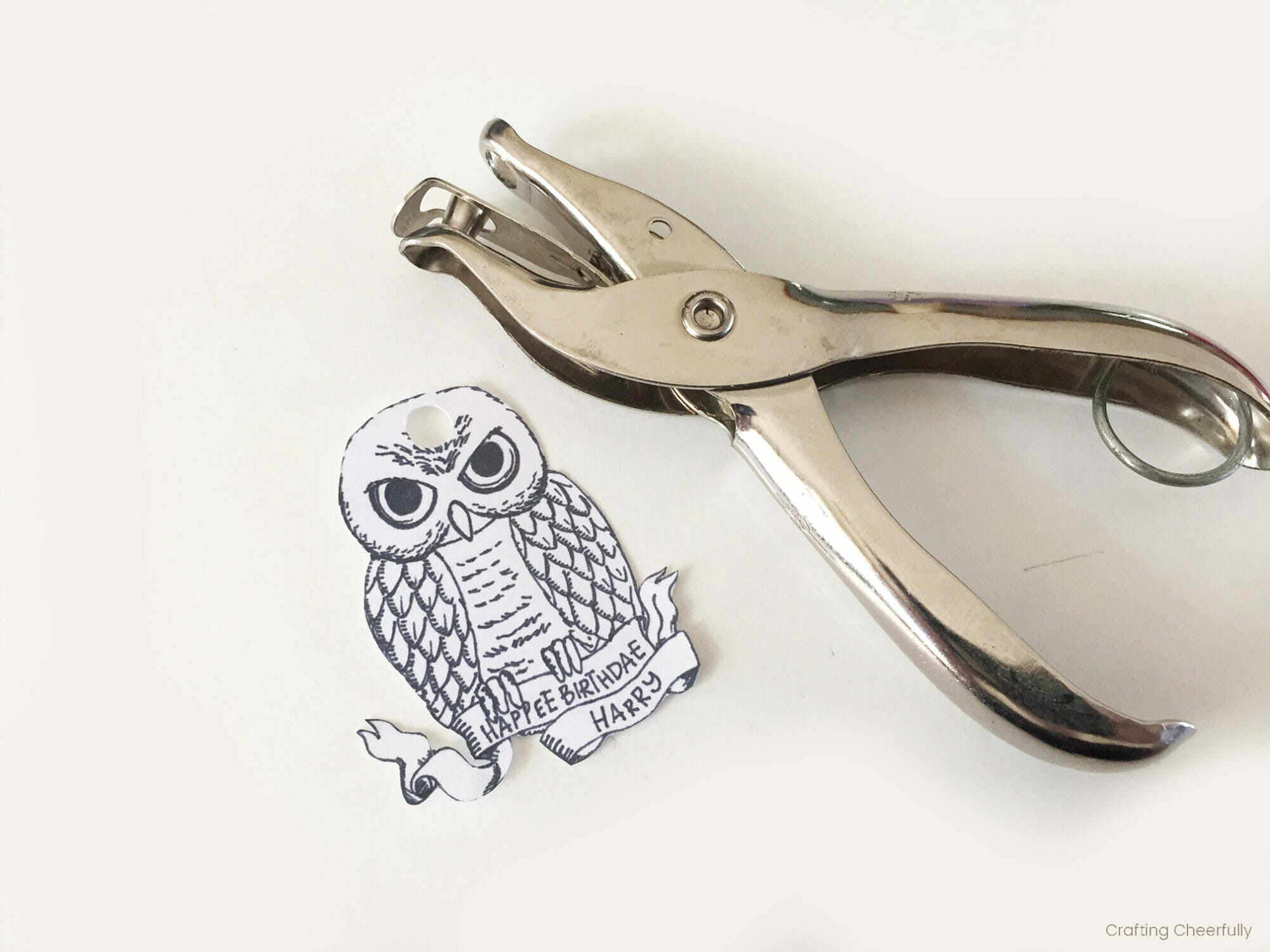 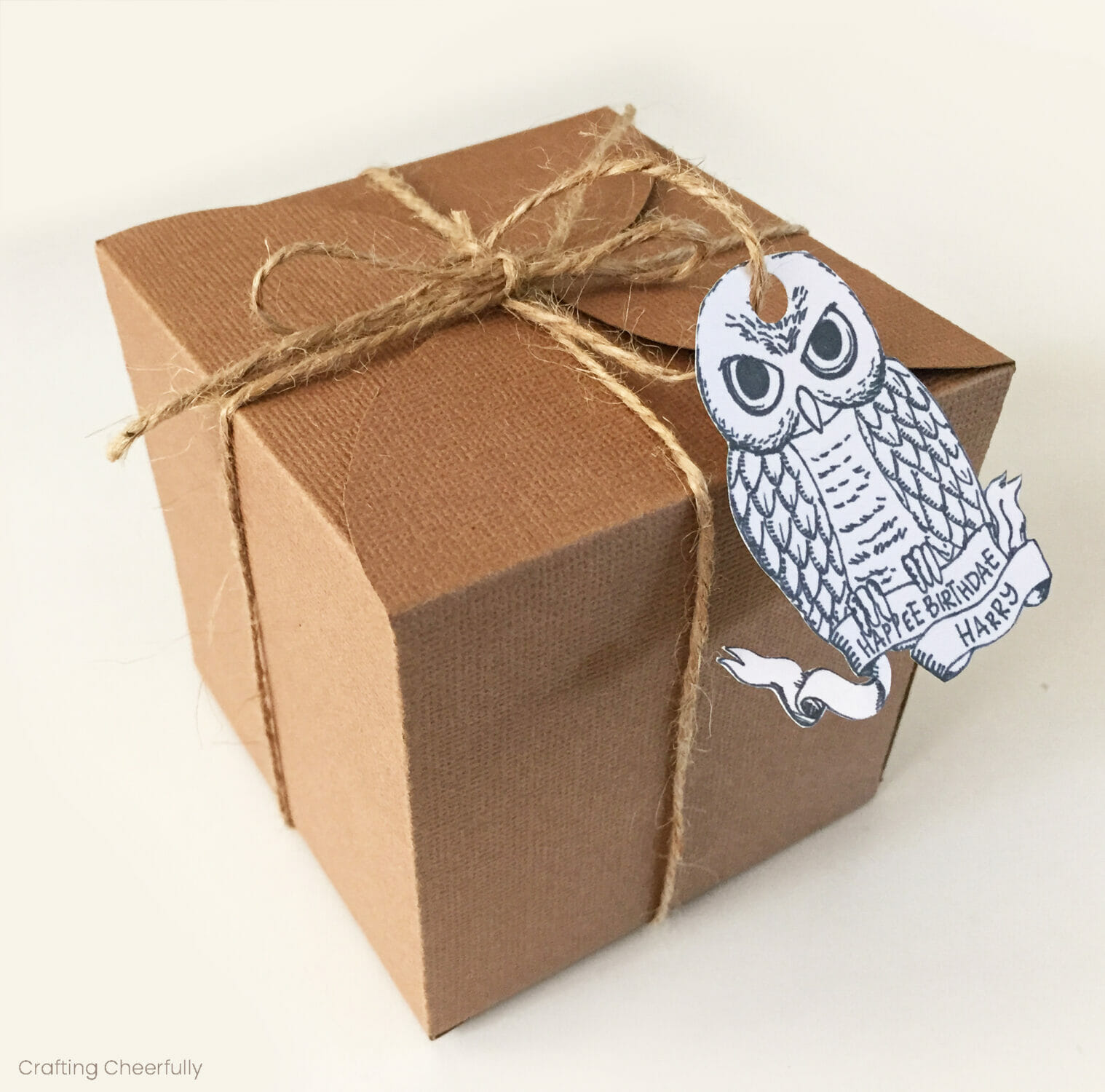 The treat box is all finished and it is time to add the best part – a cupcake! For my Harry Potter cupcakes I made chocolate cupcakes with raspberry buttercream frosting – both of the recipes I used are no longer available online but here are two that I plan to try this year when I re-make these cupcakes. I have been using Two Sisters Crafting vanilla buttercream recipe for years, so I’m excited to try their Raspberry Buttercream one.

I normally pipe the frosting on my cupcakes in a peak, but since I wanted these cupcakes to look like Hagrid made them, I used a butter knife and spread the frosting on. Next, I used green gel to write “HP” on each cupcake. The cupcakes are too small to write out the message that appeared on Hagrid’s cake in the movie, but the green writing on pink frosting is enough of a nod. 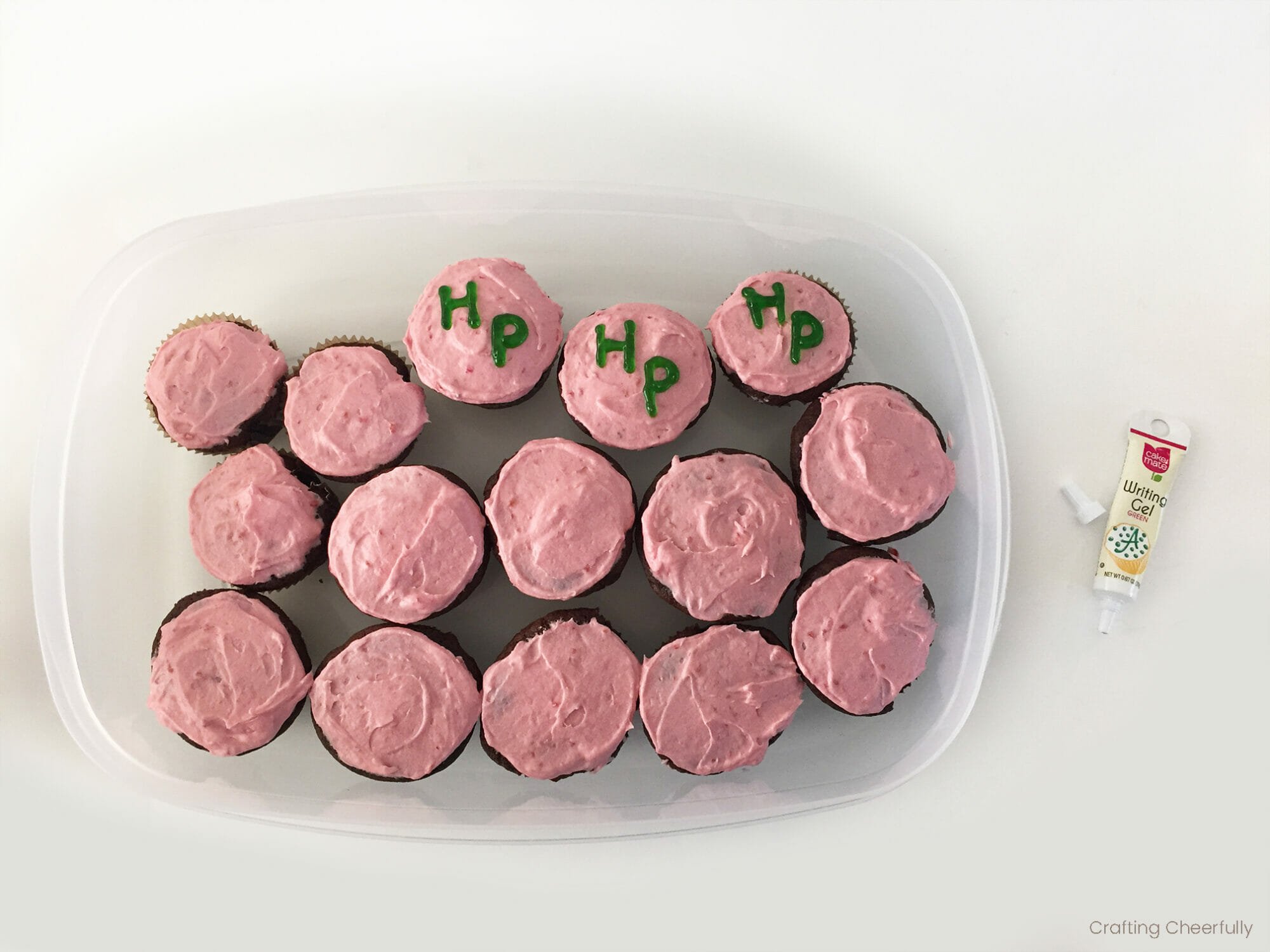 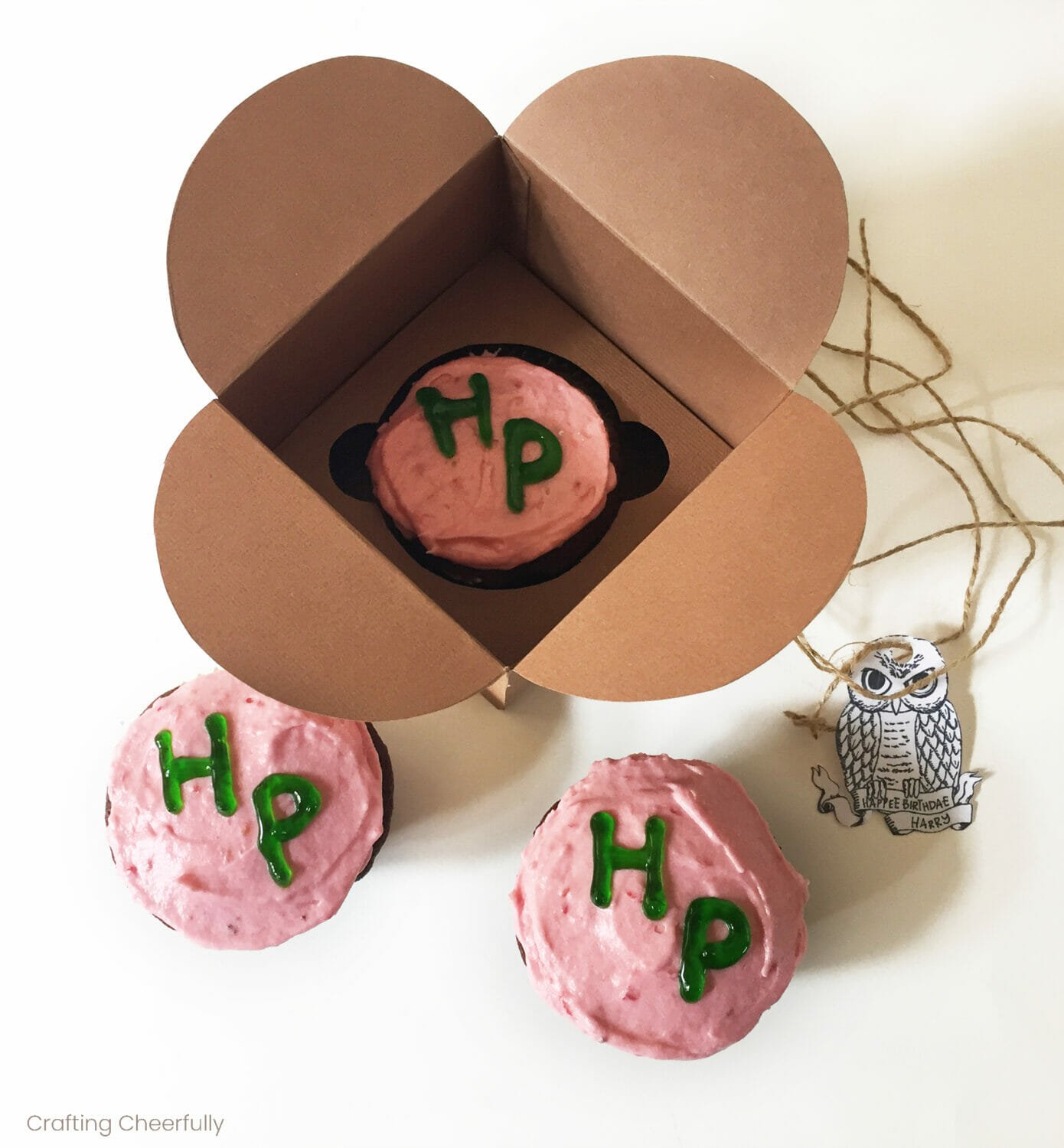 These cupcakes would be delicious any time of the year; the fresh raspberry buttercream with chocolate cake is so yummy! I’ll be back this Friday with another Harry Potter-related craft! Be sure to check out my other Harry Potter crafts including a Harry Potter Party Game, Harry Potter Wreath and more!

Download the Free File! This freebie is in my Resource Library under Free Printables, Cards and Gift Tags. The box template and the gift tag are together in one PDF packet. Enter your first name and email to get the password to download this file. You’ll also have a chance to sign up for my newsletter to receive fun craft tutorials, tips, updates and more FREE files to help make crafting something special and unique easier! 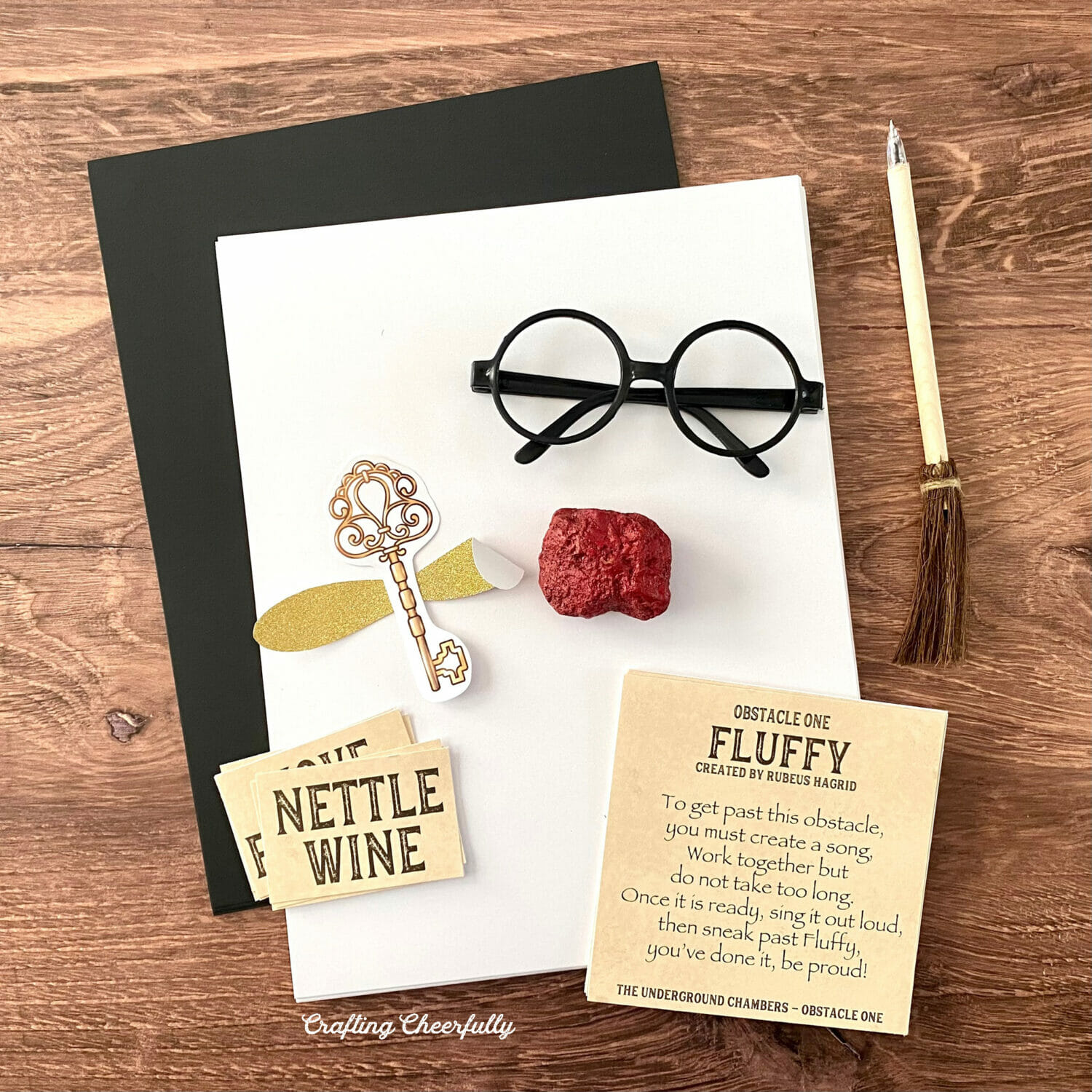 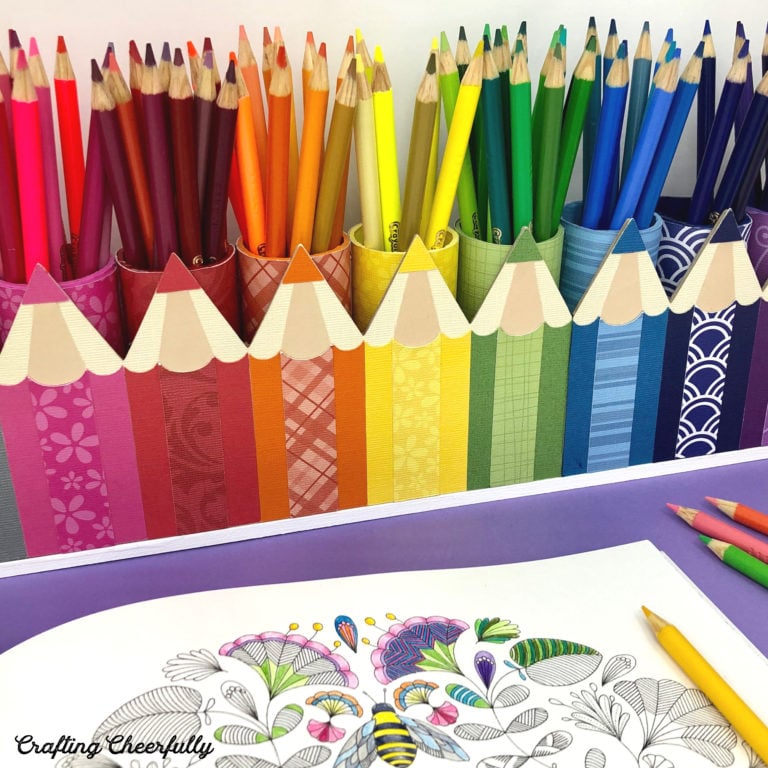 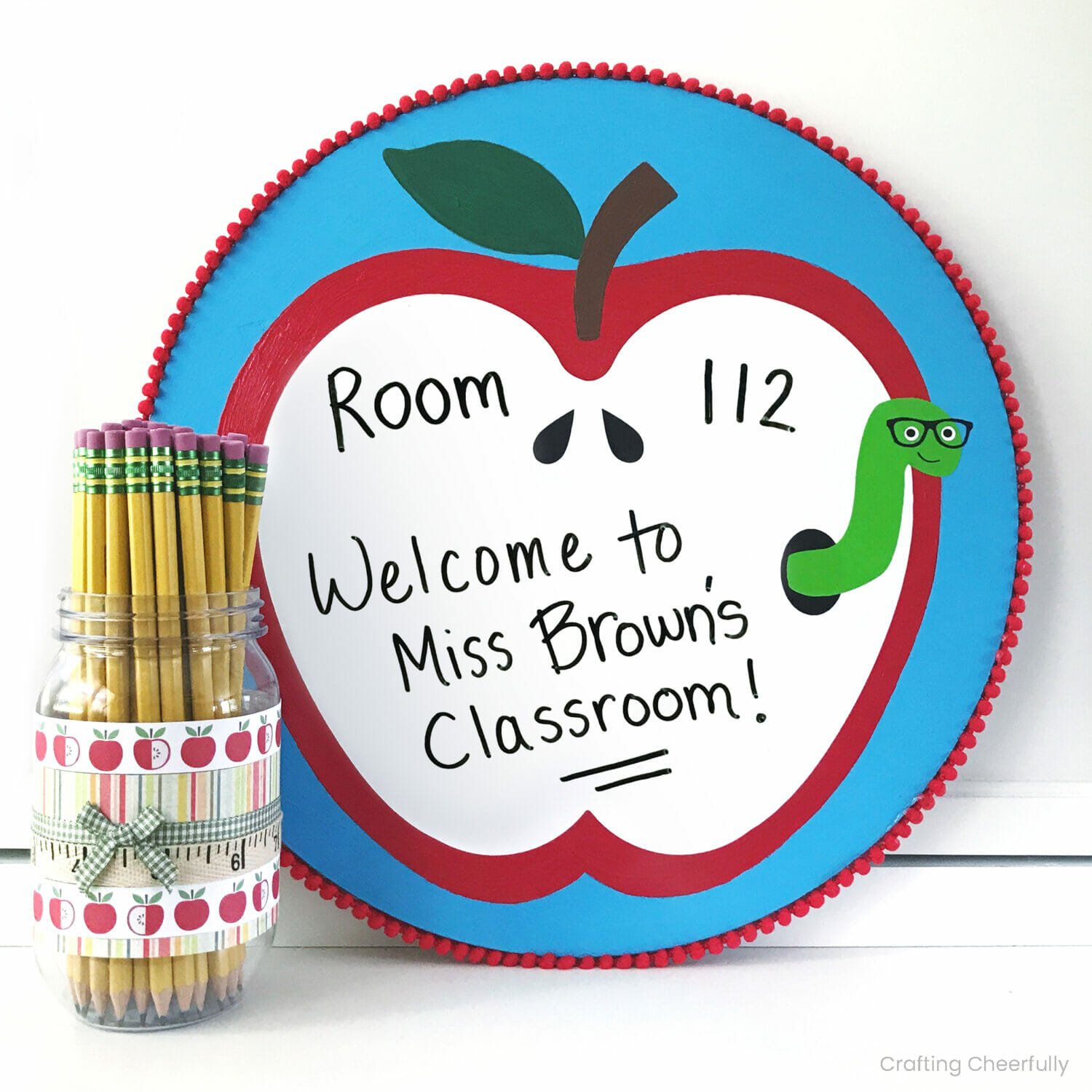 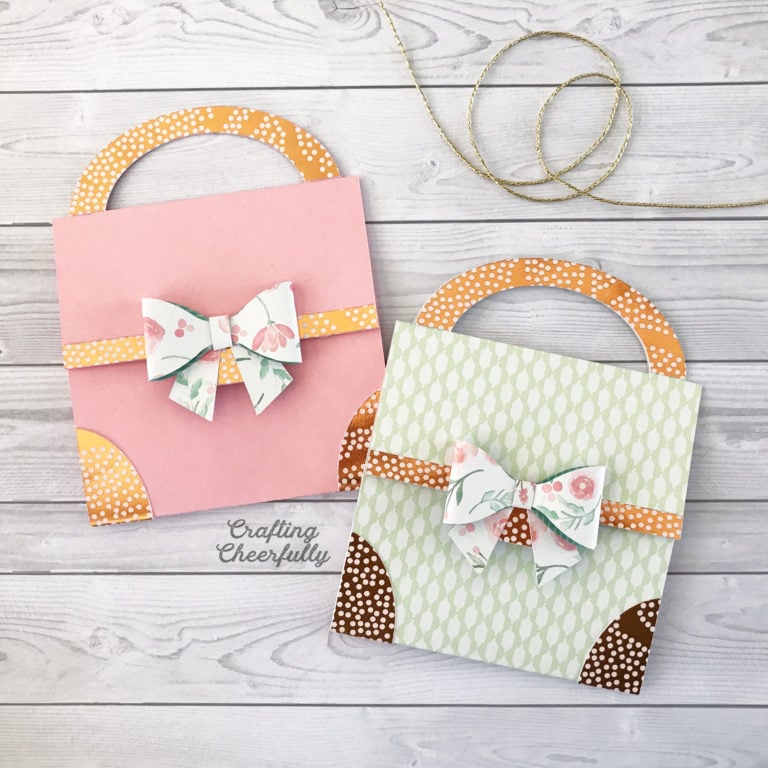 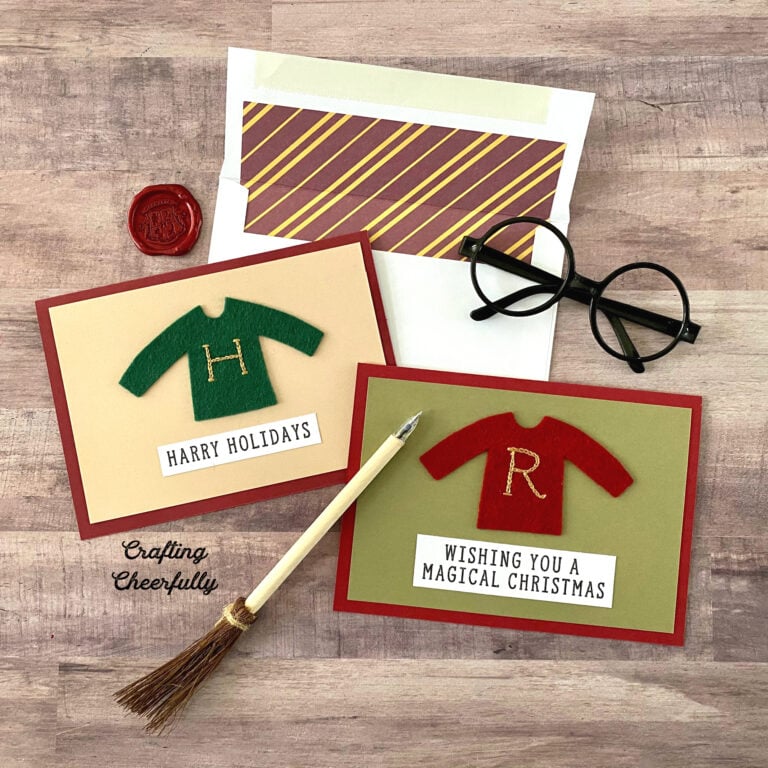 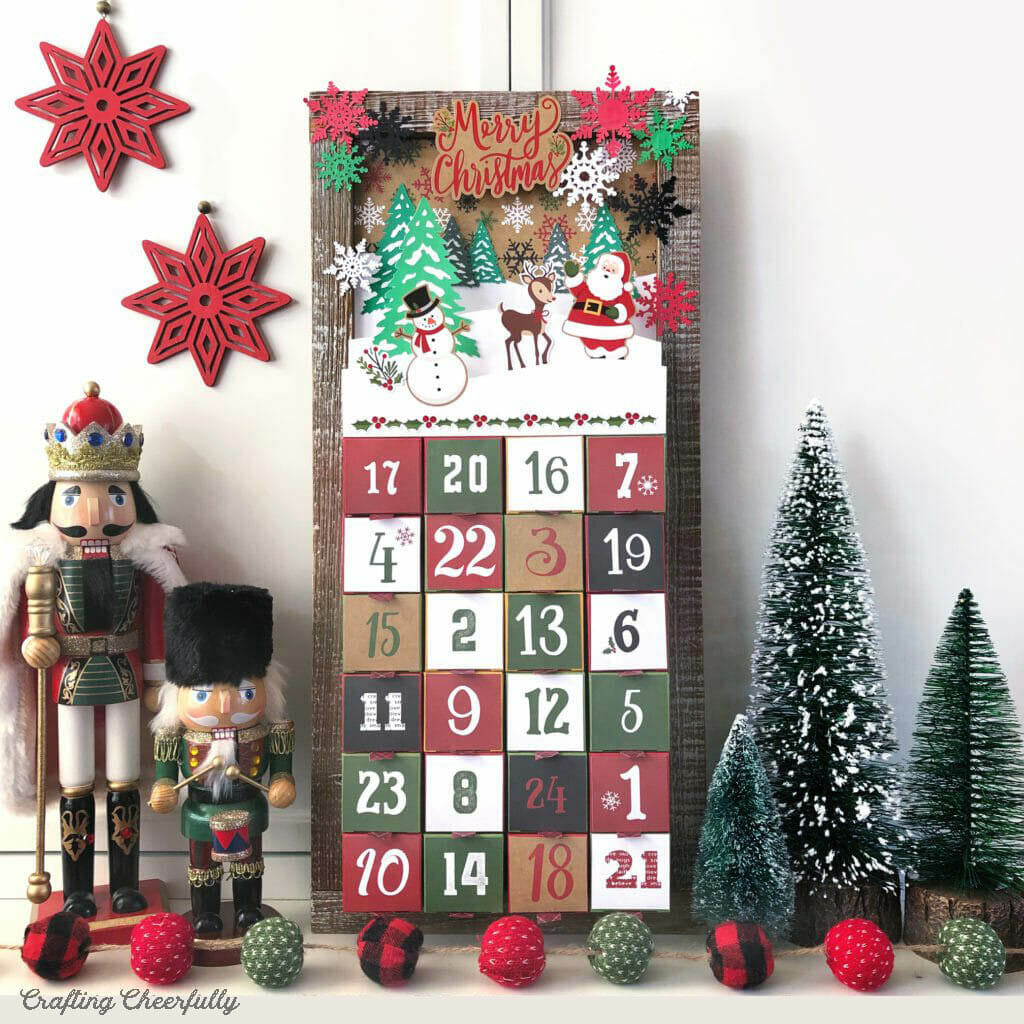