Does your child dream of being a cute pony for Halloween? Learn how I made a fun pony costume using fleece. The hood with a fleece-tied mane was such a fun project and it turned out so cute! 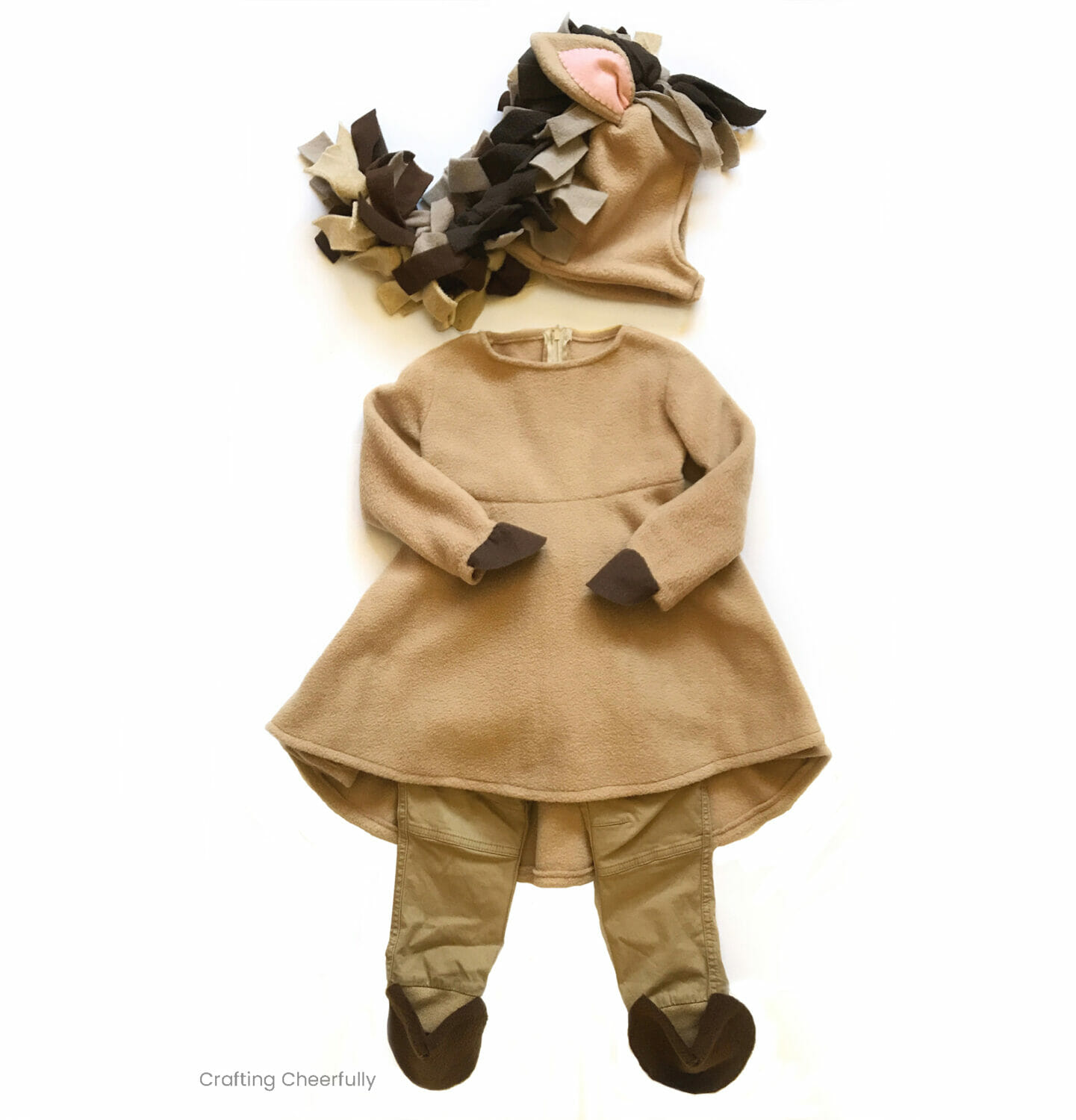 For Halloween this past year, my daughter asked to be a pony! I had a lot of fun creating this cute pony costume for her using cozy fleece. Our Halloweens are usually cold, so my go-to Halloween fabric is fleece. It goes on sale often at Joann Fabrics and I love that it doesn’t fray so I don’t need to finish my edges. This definitely helps sewing go quickly!

I have used fleece to make other Halloween costumes for my kids including my daughter’s Baby Dragon costume a couple years ago and a fleece lion costume for my son. I actually used some of the fleece left over from that lion costume for the pony – which made me super happy to use some materials from my stash.

To create the pony costume, I used the Butterick pattern B6013 to make a fleece dress. View A of the pattern had a nice hi-low hem which reminded me of the a pony’s tail in the back.

Since our Halloweens are usually pretty chilly, I added sleeves to the pattern using one of my daughter’s shirts to create the pattern. I was also able to skip the lining for the dress that the pattern called for. Instead, I just turned over the fleece neckline and top stitched it down.

I purchased tan khaki pants from Target to be worn underneath the dress. The hoofs were a really cute addition to the costume. I made them using brown felt. After hemming the sleeves, I stitched the felt hoofs to the end of the sleeves.

Since a pony has four hoofs, I made one more set of hoofs that could be worn over my daughter’s shoes. With a little bit of elastic, I was able to make them so they just slid right over her shoes. This really helped make the costume look like a pony! 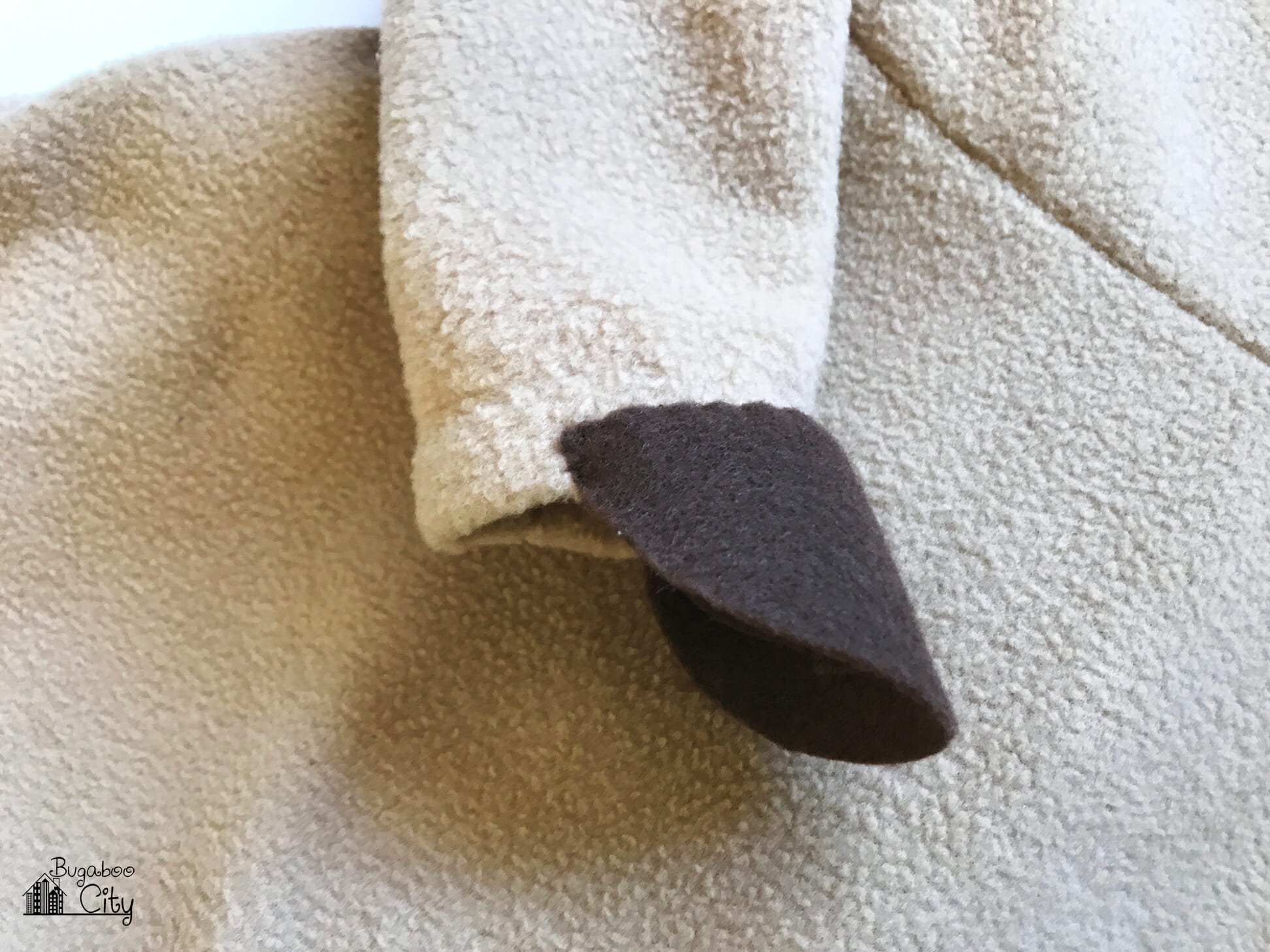 The pony hat is my favorite part of the costume! I created the pattern for the base of the hat using one of my daughter’s winter hats. I added a small snap closure under the chin to help keep it on. The hat is made from the same color fleece as the dress with a little bit of pink felt in the ears. 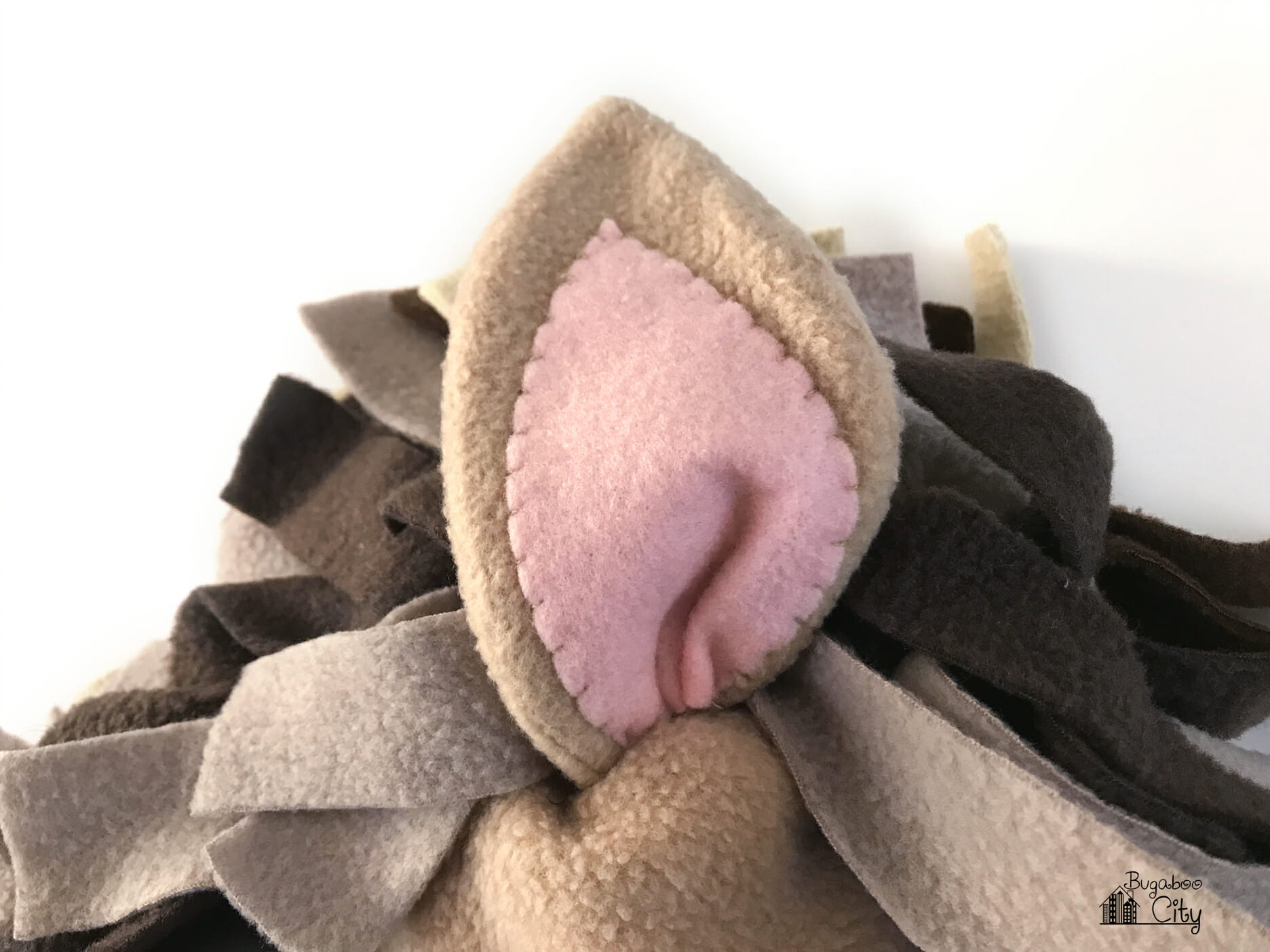 The hardest part was figuring out how to create the mane! After several failed attempts – including an entire night of sewing individual strips of fleece onto the hat – I finally thought of trying to tie the fleece like you do for those popular no-sew tie blankets. This worked so well! The knot helped the fleece stick out straight, which was perfect for the mane!

Below you can see a few pictures of the tail – which was done the exact same way as the mane. I cut long rectangles of four different colors of fleece – about 6″ x 20″. I positioned two rectangles on either side of the zipper/center back seam and stitched them down along their center line. This now gave me four layers of fleece on each side. I cut the fleece into 1″ strips and knotted two layers together. I ended up with four rows of knotted fleece, two on either side of the zipper! 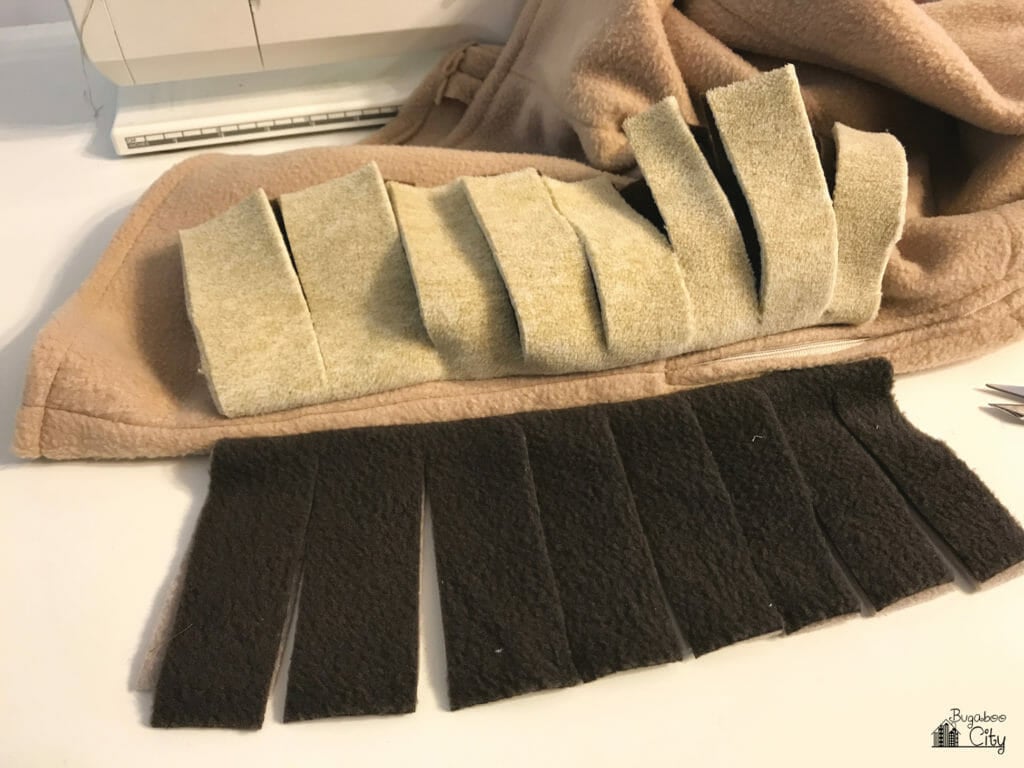 The knotted fleece stuck straight out and all of the different colors of fleece looked so fun mixed together. The main started at the top of the hat and extended off of the back. I also added a tail to the back of the dress. 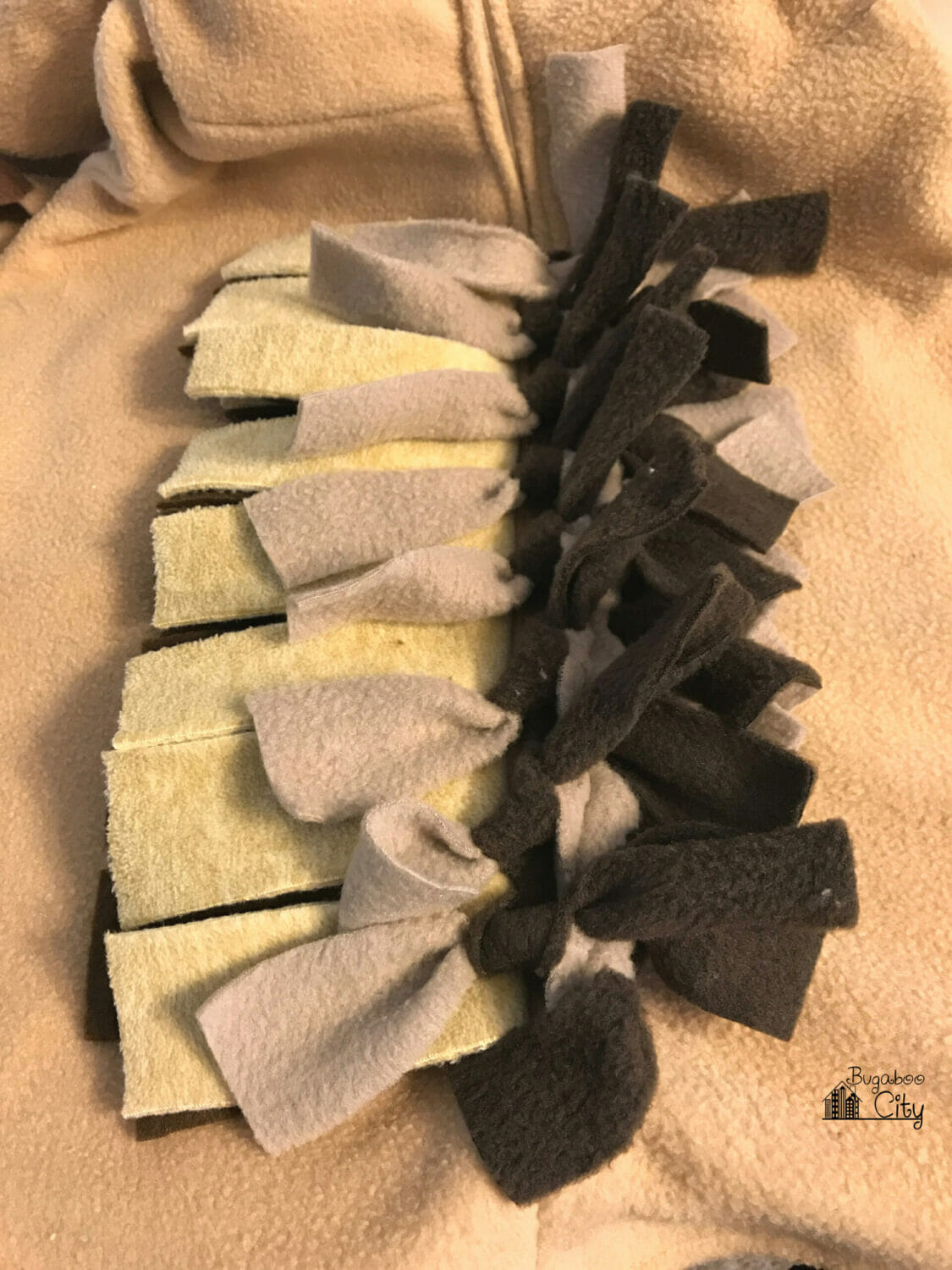 I love how the mane and tail turned out – and cannot believe how fast it was to create. It actually took me less time to create the mane this way than it did to seam rip my failed attempts! :) 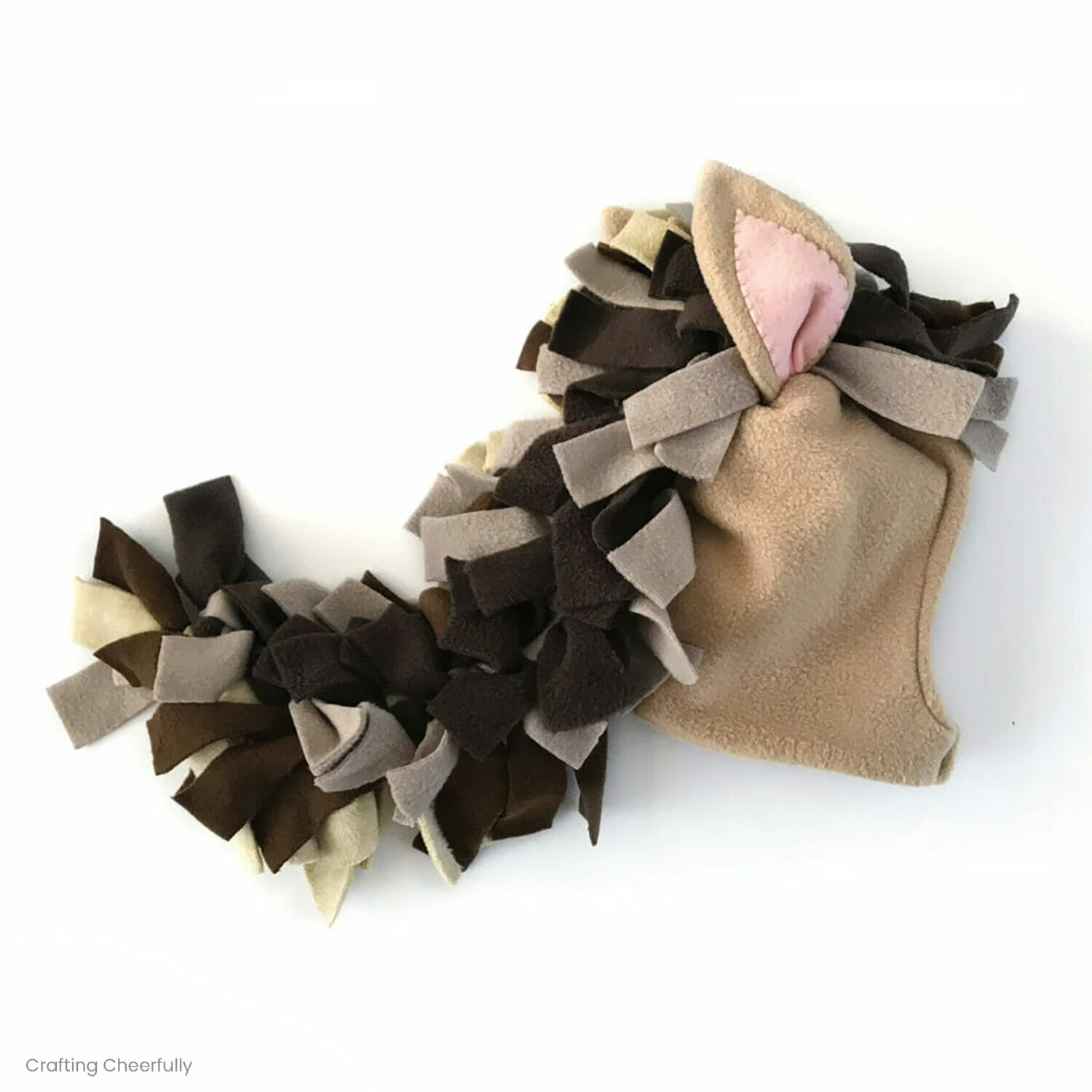 This method of creating a mane could be used on an existing hooded sweatshirt. It may be a bit heavy on the hood if it doesn’t have a drawstring to hold it closed under the chin but it would work.

I’m very temped to make my daughter a unicorn hoodie – especially since I have so much fleece left over from my unicorn pillow project!

My kiddos love their Halloween costumes this year and I really enjoyed making them! Check out my other fun Halloween Crafts including more children’s costumes! 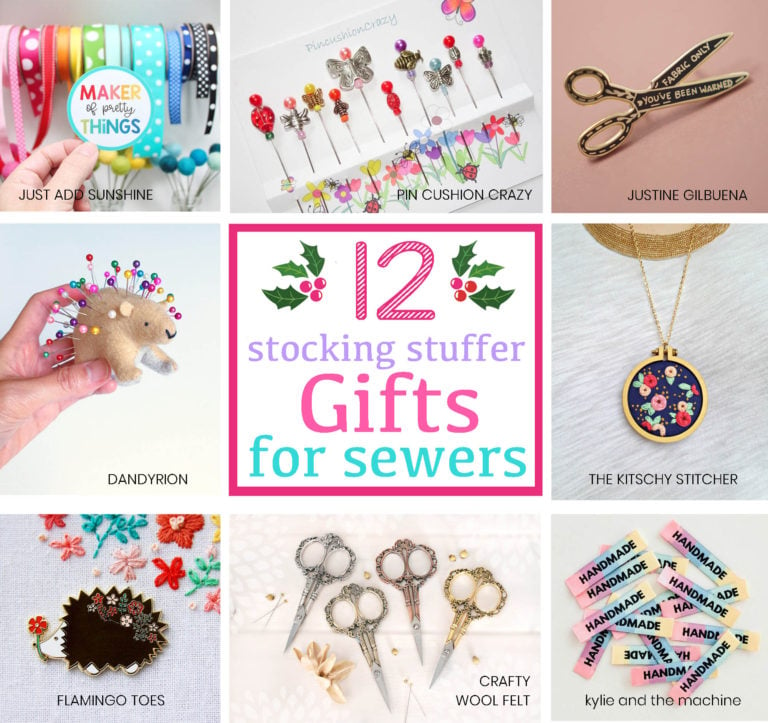 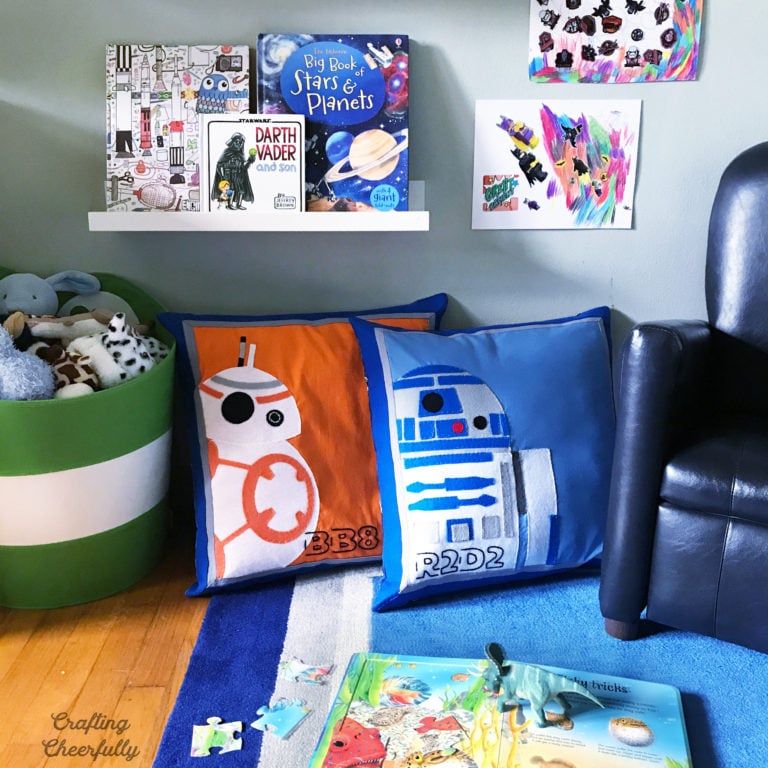 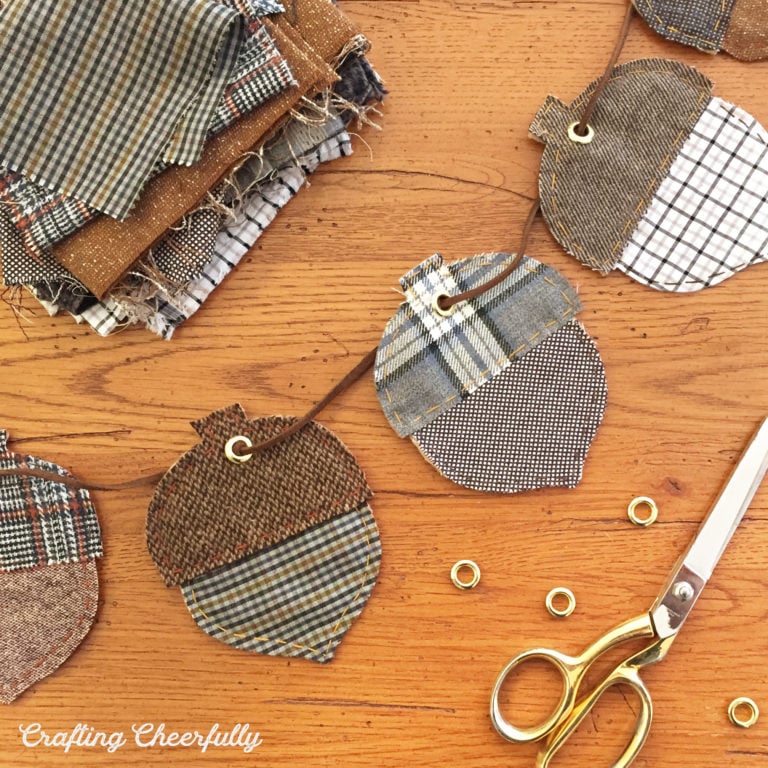 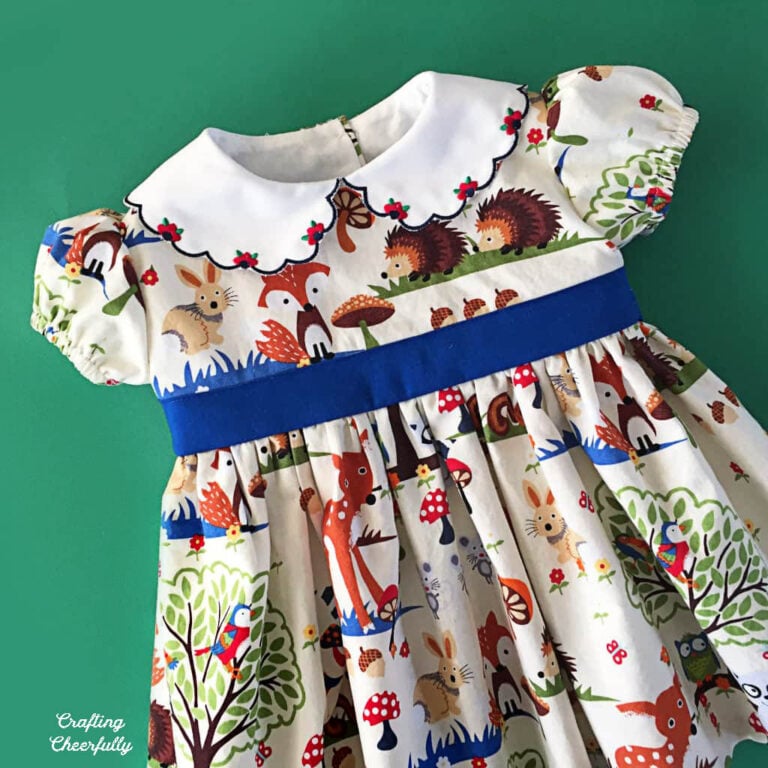 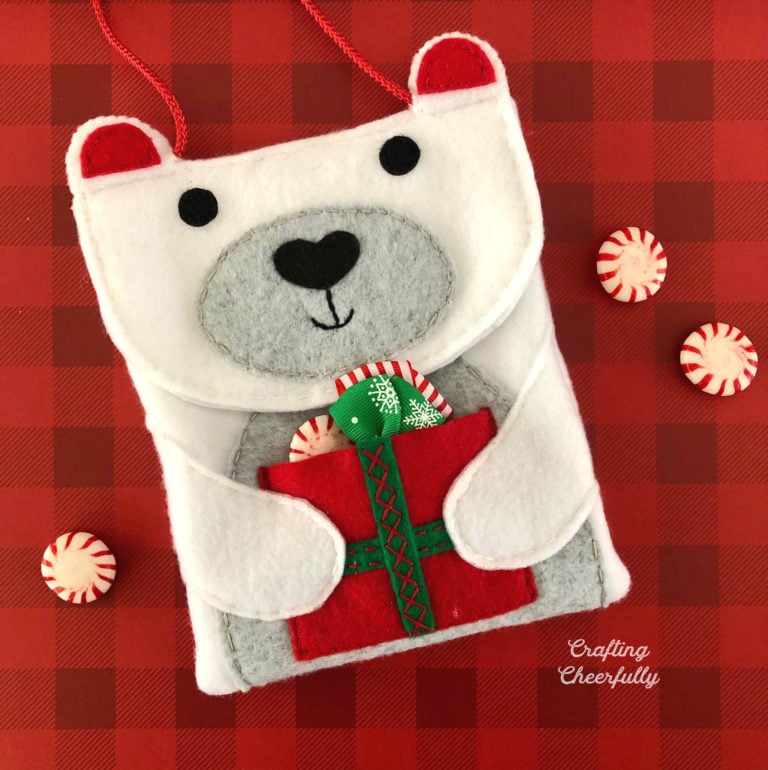 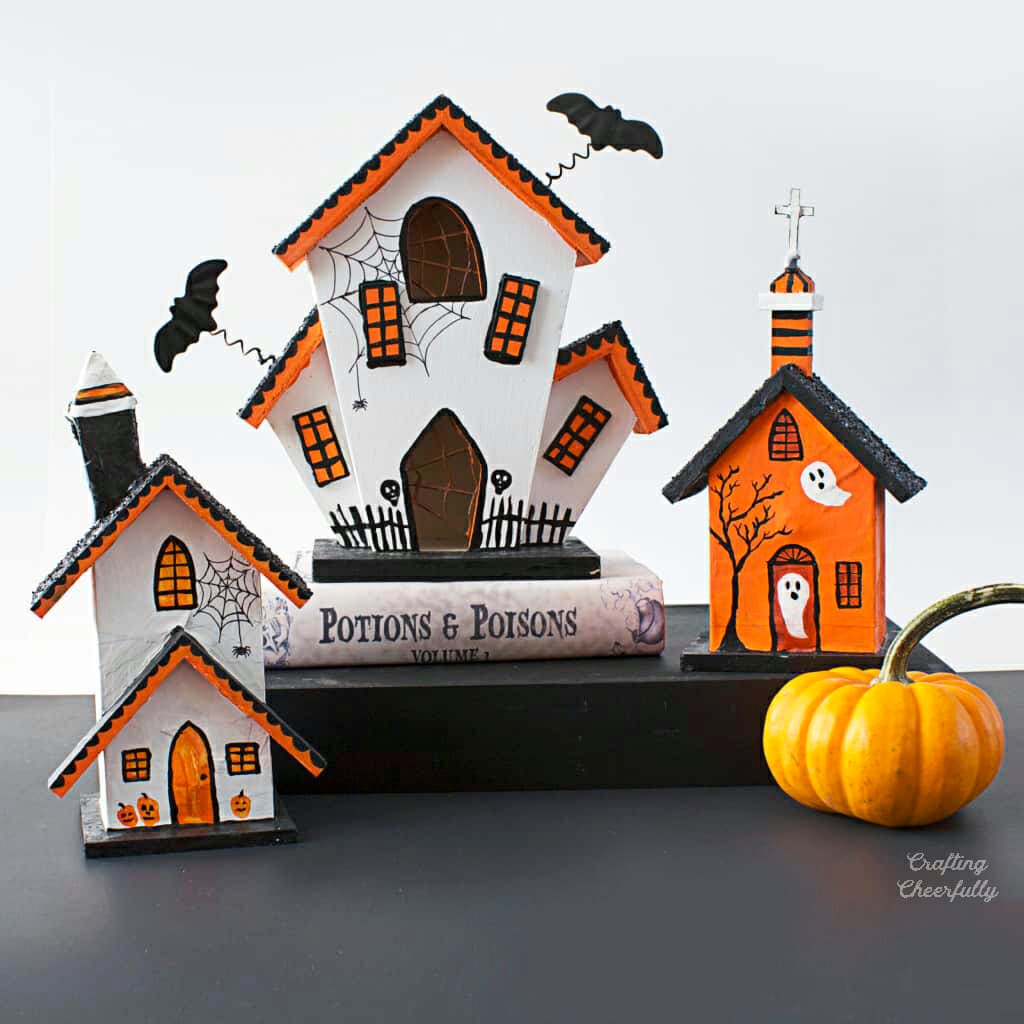